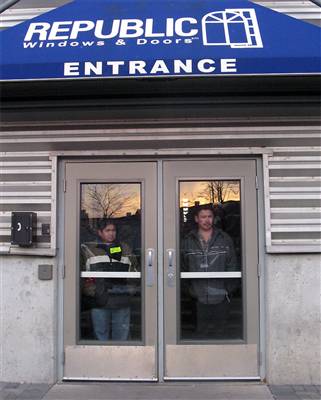 Laid off workers peer through the doors of the their abruptly shuttered factory where they staged a sit-in on December 5, 2008 demanding that the bank which cut off credit to the Chicago company free up some financing so they can be paid their final wages. The 250 unionized workers planned to camp out at the factory until a settlement is reached with Republic Windows & Doors and Bank of America. (MIRA OBERMAN/AFP/Getty Images)
For updates and to help go to:
http://www.ueunion.org/ue_republic.html