The Great Recession and the Deficit by Paddy Quick 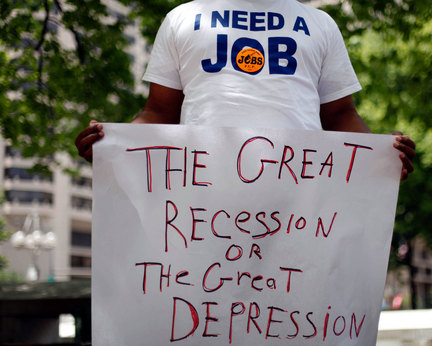 The Great Recession will take a long time to come to an end. Even the most optimistic forecasters expect the official unemployment rate in the US to stay above 9% through 2011, and it may be 4 or even more years before we get back to the same level of employment we had before the recession began. The arguments I want to make are (1) that we should not fall for the line that “we,” i.e. workers, need to cut back to get out of this recession and (2) that propaganda about the problems of the deficits is being used to justify a multi-pronged attack on the standard of living of working families.
You don’t need me to go over how bad things are for working people, the working class. And I’m not going to review what led to the Great Recession, other than to say that recessions are regular occurrences in the capitalist system in which we live. (Oh dear, a “bad word” – “capitalism” – but we’re all adults here, and the time for euphemisms is long past.) This recession is indeed the worst since the Great Depression of the 1930s, and it resembles it in both its probable length and its international character, although the decline in production and the level of unemployment are less than then.  It is, however, in some ways, potentially far more serious and likely to have a far worse long-term effect.
Here we come to the key feature of today’s Great Recession – namely the multipronged attack on our standard of living. This attack comes in several forms and it is important to understand all of them: