Graph/Table of the Week

Democrats are often seen as Big Government, tax and spend liberals, while Republicans are generally cast as small government libertarian/conservatives. The graph below shows federal spending, revenue and the fiscal balance (as % of GDP) since the Clinton administration (2014 is an estimate, and 2013 might be revised). 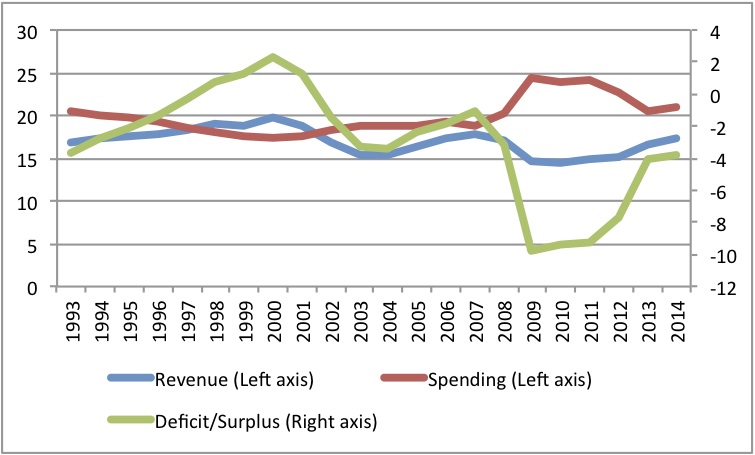 It is clear that the traditional representation makes little sense. Spending and deficits have decreased with Democrats (Clinton and Obama). The brief surplus period at the end of the Clinton era vanished, not only as a result of the 2001 recession, but also because revenues continued to decrease (until 2006), in part following tax cuts mostly for the wealthy, with increased spending, a good deal of that caused by increased defense spending.
Since the recession, and the inherited 2009 budget, Obama has reduced spending, while revenues have been recovering with the rest of the economy (i.e. slowly). This year the federal deficit should be back in what could be considered normal levels. But that’s not necessarily good, from a Keynesian perspective.