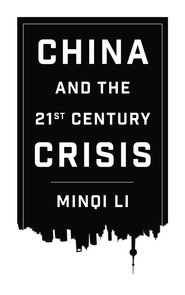 The USA is widely seen as the country at the centre of the recent economic crash. But will this be the case the next time the system goes into shock? By looking at the big questions of class struggle, global economic imbalances, peak oil, climate change and political power play, Minqi Li argues that by the time of the next crisis, China will be at the epicentre of these contradictions. Unlike previous books, China and the 21st Century Crisis analyses how the political and economic imbalances in China will exacerbate system collapse, and how this could happen much sooner than we imagine, possibly within a decade. Li writes from a Marxist and ecological perspective, and points out that the limits to capital are fast approaching. China is the last large region (and source of cheap labour) into which capital could expand: the system is at its limits. By combining this argument with issues surrounding the planet’s ecological limits and the internal politics of the Chinese Communist Party, Li commands a narrative of China at a pivotal, and possibly apocalyptic stage.