Dean Baker on the CBO & Reemergence of the Deficit Hawks 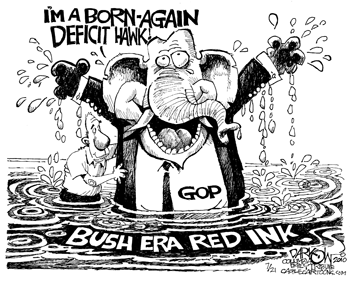 It is often said that in Washington, no bad idea stays dead for long. This is certainly true for the crazy paranoia we see around the budget deficit and idea that it is going to bankrupt the country and leave our children impoverished. The moral of this story is usually that we need to cut and/or privatize Social Security and Medicare. The deficit hawks had been relatively quiet the last few years. They had a big victory with the 2011 budget deal between President Obama and the Republicans in the House. This led to substantial reductions in spending for 2012 and subsequent years. These cuts slowed the economy and kept millions of people from getting jobs, but the small positive from the deal was that it temporarily silenced the deficit hawks. After all, the deficit had fallen rapidly and the debt-to-GDP ratio was going down, what did they have to complain about? The new budget projections released last month by the Congressional Budget Office (CBO) gave them something to complain about. The projections show deficits rising as a share of GDP with the debt-to-GDP also rising.