'Up All Night' Protests Sweep France as 100,000 Join Pro-Democracy Movement 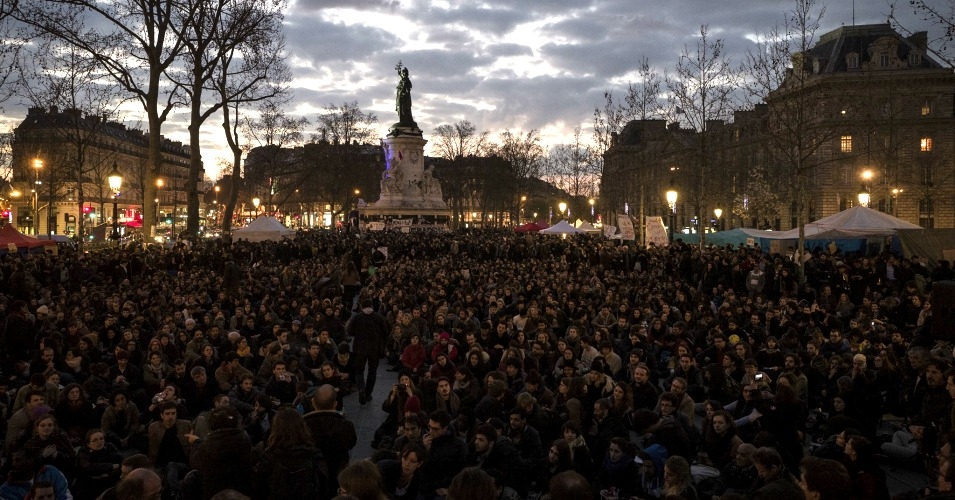 Demonstrations this weekend were held in as many as 60 cities and towns across France as well as in Belgium, Germany, and Spain, according to reports, as an estimated 120,000 protested against austerity, globalization, increasing inequality, privatization, and the continent’s severe anti-migrant policies. What began as a rebuke of the state’s anti-labor policies has grown into a nation-wide pro-democracy movement that has been likened to the Indignados movement in Spain, or the Occupy protests in the United States.
For months, ideological tensions have been on the brink of combustion across France and greater Europe, particularly in response to the European Union’s unpopular austerity economics and, more recently, the anti-migrant policies that have taken hold amid the larger crackdown on rights following the bombings in Brussels and Paris.
A statement issued by the Nuit Debout public assemblies reads in part:

Our mobilization was initially aimed at protesting against the French Labour Law. This reform is not an isolated case, since it comes as a new piece in the austerity measures which already affected our European neighbors and which will have the same effects as the Italian Job Acts or the Reforma Laboral in Spain. This concretely means more layoffs, more precarity, growing inequalities and the shaping of private interests. We refuse to suffer this shock strategy, notably imposed in the context of an authoritarian state of emergency.
…This movement was not born and will not die in Paris. From the Arab Spring to the 15M Movement, from Tahrir Square to Gezi park, Republic square and the plenty of other places occupied tonight in France are depicting the same angers, the same hopes and the same conviction: the need for a new society, where Democracy, Dignity and Liberty would not be hollow shells.