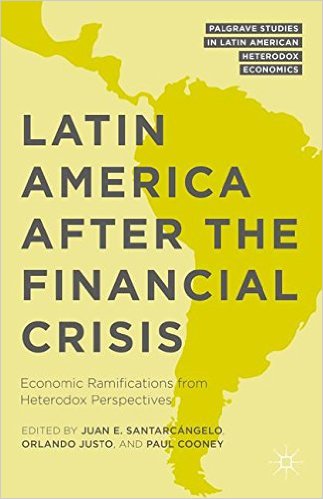 The global crisis is considered by many economists, scholars, and policymakers to be the worst crisis since the Great Depression of the 1930s. It resulted in the threat of total collapse of many large financial institutions, the bailout of banks and other businesses by national governments, and significant downturns in stock markets around the world. However, the economic and social impact of the crisis was not the same in all countries and regions. Several economic analyses have emerged that attempt to account for the main features of the crisis, highlighting the contribution made by different heterodox schools of thought. These approaches, among which we can underline the Post-Keynesians and various Marxian interpretations, not only provide strong criticisms of the dominant neoclassical theory, but also propose conclusive analyses to understand the complexities of the current social reality. One of the regions that has a longstanding tradition of heterodox economics and has been less affected by the global financial crisis is Latin America. The countries of this region were able to achieve annual growth rates of around 4% for the period 2003–2013, 48% higher than the average annual GDP growth rate registered in the period 1990–2002.
The aim of this book is to explain how the global financial crisis affected Latin America, analyze the main transmission channels that helped the crisis to spread in the region, and understand why this one was not as severe as other crises have been in the past. Hence, the purpose of this book is to combine different heterodox traditions with analysis of how the global crisis affected Latin America.