JBF on Monopoly Capital at the Half-Century Mark 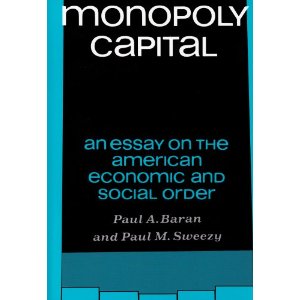 A half-century after its publication, Paul Baran and Paul Sweezy’s Monopoly Capital remains the single most influential work in Marxian political economy to emerge in the United States.3 Like any great theoretical work that has retained its influence over a long period of time, Monopoly Capital‘s significance today derives not simply from the book itself, but from the complex debates that it has generated. In recent years, interest in Baran and Sweezy’s magnum opus has revived, primarily for two reasons: (1) the global resurgence of debates over the constellation of issues that their work addressed—including economic stagnation, monopoly, inequality, militarism and imperialism, multinational corporations, economic waste, surplus capital absorption, financial speculation, and plutocracy; and (2) the new, fundamental insights into the book’s origins resulting from the publication of its two missing chapters and the public release of Baran and Sweezy’s correspondence.
I shall divide this introduction on the influence and development of the argument of Monopoly Capital over the last fifty years into three parts: (1) a brief treatment of the book itself and its historical context; (2) a discussion of responses to Monopoly Capital, and of the development of the tradition that it represented, during its first four decades, up to the Great Financial Crisis that began in 2007; and (3) an assessment of the continuing significance of monopoly capital theory in the context of the historical period stretching from the Great Financial Crisis to the present.