New book by Christian Chun: The Discourses of Capitalism 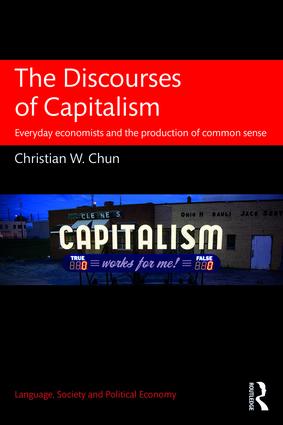 Since the global economic crisis of 2007-2008, ‘capitalism’ has been the topic of widespread general discussion in both mainstream and social media. In this book, Christian Chun examines the discourses of capitalism taken up by people in their responses to a street art installation created by Steve Lambert, entitled Capitalism works for me! In doing so, he considers several key questions including:

Chun looks at how dominant discourses in social circulation operate to co-construct and support capitalism, and the accompanying counter-discourses that critique it. This is key reading for advanced students of discourse analysis, language and globalisation/politics, media/communication studies and related areas.

See rest here
For those interested in performing a review of this book for RRPE, please do not hesitate to get in touch with David Barkin