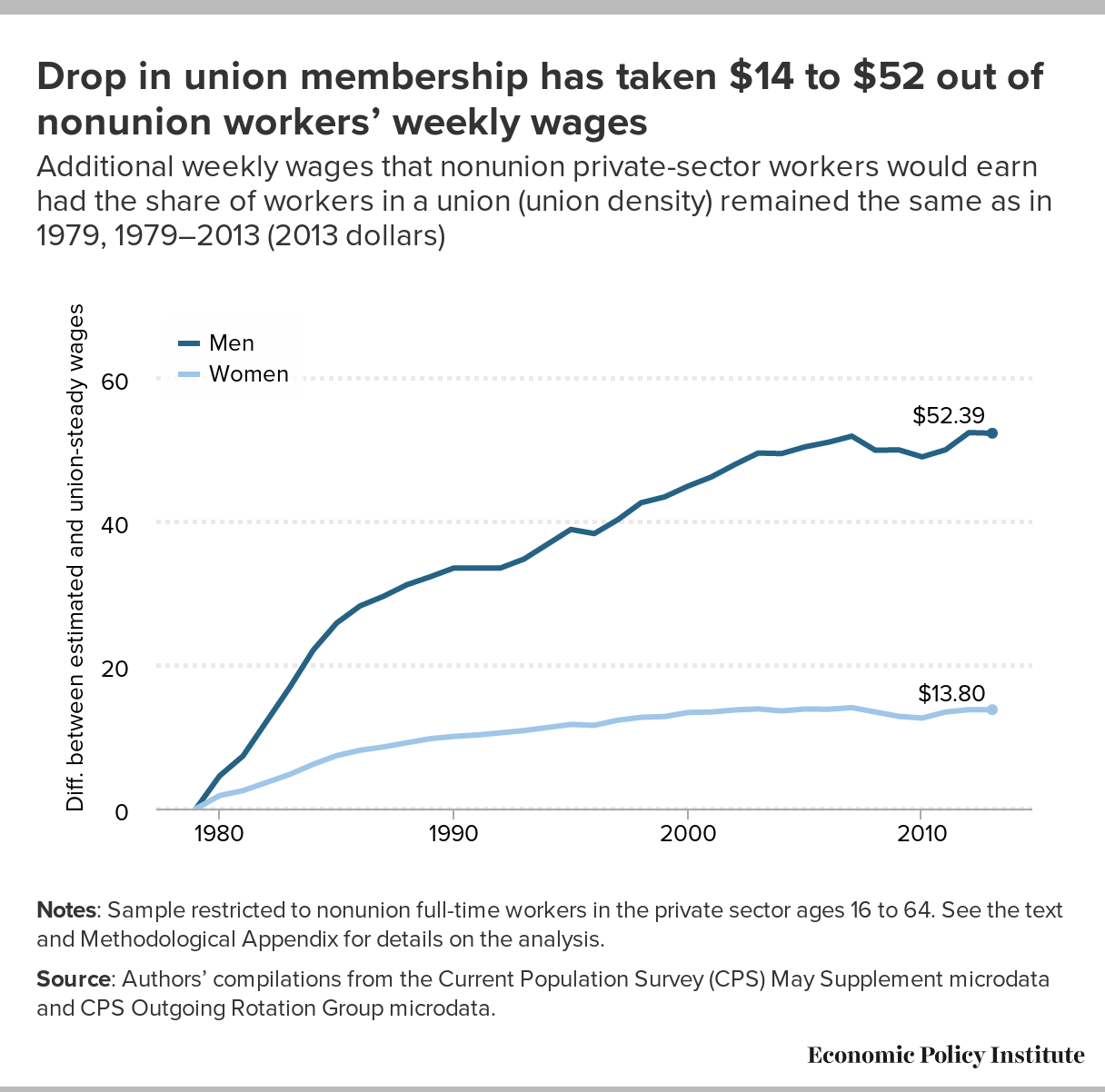 Executive summary:
Pay for private-sector workers has barely budged over the past three and a half decades. In fact, for men in the private sector who lack a college degree and do not belong to a labor union, real wages today are substantially lower than they were in the late 1970s.
In the debates over the causes of wage stagnation, the decline in union power has not received nearly as much attention as globalization, technological change, and the slowdown in Americans’ educational attainment. Unions, especially in industries and regions where they are strong, help boost the wages of all workers by establishing pay and benefit standards that many nonunion firms adopt. But this union boost to nonunion pay has weakened as the share of private-sector workers in a union has fallen from 1 in 3 in the 1950s to about 1 in 20 today.
While we avoid strict causal claims about wage determination, the analytical approaches summarized in this report enable us to assess the independent effects of union decline on wages and lend confidence to our core contention that private-sector union decline since the late 1970s has contributed to substantial wage losses among workers who do not belong to a union. This is especially true for men. And most hurt by the decades-long decline in the nation’s labor movement are those nonunion men who did not complete college, or go beyond high school—groups with the largest erosion of union membership over the last few decades.
Key findings from our report include the following:

Nonunion workers benefit from a strong union presence in their labor market in many ways. Strong unions set pay and benefits standards that nonunion employers follow. Those employers may raise pay for some workers to forestall an organizing drive, which leads to an upward adjustment in wages of workers above them, to maintain relative pay differentials (similar to the effects of minimum-wage increases).
Even absent organizing activities in their spheres, nonunion employers may also follow the standards that unions help establish through politicking for labor-friendly policies, instituting informal and formal rules governing labor conditions, and generally serving as a cultural force arguing for a “fairer share” for working men and women. (For example, highly unionized states helped lift minimum wages above the levels of states where labor was comparatively weak.) Higher pay in organized establishments increases competition for labor so that nonunion firms lift wages to prevent their employees from leaving for higher, union wages. And in setting wages, new market entrants often look to what industry leaders are doing; when organized labor was strong, many of these leaders were unionized.
Rebuilding our system of collective bargaining is an important tool available for fueling wage growth for both low- and middle-wage workers and ending the era of persistent wage stagnation.
Read rest here