Prospects for the Spanish Left 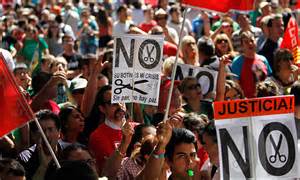 […] Improvisation is the name of the game for members of the new Spanish precariat. At Madrid’s main square, the Plaza Mayor, newly homeless citizens (some highly educated) rise early for work busking or selling scrap metal. Throughout the country, members of the growing reserve army of ninis—or “neither nors,” the quarter of the young Spanish who are neither in school, nor employed, nor in training programs—forage for food to take home to their squatted apartments. Los irrecuperables (“unrecoverables”), the more than half of long-term unemployed Spanish over age 50, are meanwhile forced to figure out how to subsist on severely reduced pensions and the charity of their fellows. The homeless, ninis, and irrecuperables are not alone in their plight. Indeed, stability and security elude even the employed afortunados (“lucky ones”) in austerian Spain. Changes in Spanish labor law, first passed by the center-left (and resolutely neoliberal) Spanish Socialist Workers’ Party (PSOE) and then expanded by the conservative People’s Party (PP), have eroded workers’ rights and enabled employers to seize an even larger share of national income. Wages and benefits are taking a beating, too. Total worker compensation fell from about €523 million in 2007 to less than €510 million in 2015. Even as unemployment has risen, total spending on unemployment benefits has fallen more than 25%. Temporary work is replacing traditional employment. The average length of a contract—formal contracts between employer and employee are legally required in Spain—fell from 77 days in 2008 to 57 by 2014, and part-time work constitutes one third of all labor contracts. Finally, the percentage of unpaid overtime rose from less than 40% in 2008 to over 55% in 2015—a sum equal to the lost income of approximately 87,000 full-time jobs.