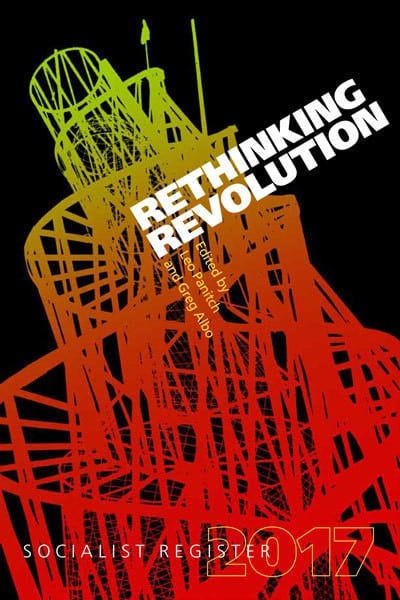 by Gregory Albo and Leo Panitch. From MR Press.
One hundred years ago, “October 1917” galvanized leftists and oppressed peoples around the globe, and became the lodestar for 20th century politics. Today, the left needs to reckon with this legacy—and transcend it. Social change, as it was understood in the 20th century, appears now to be as impossible as revolution, leaving the left to rethink the relationship between capitalist crises, as well as the conceptual tension between revolution and reform.
Populated by an array of passionate thinkers and thoughtful activists, Rethinking Revolution reappraises the historical effects of the Russian revolution—positive and negative—on political, intellectual, and cultural life, and looks at consequent revolutions after 1917. Change needs to be understood in relation to the distinct trajectories of radical politics in different regions. But the main purpose of this Socialist Register edition—one century after “Red October”—is to look forward, to what might happen next.
Table of Contents: