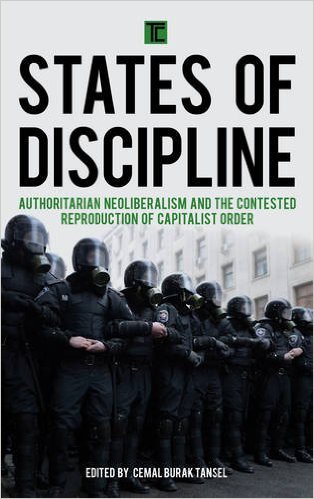 Despite the severity of the global economic crisis and the widespread aversion towards austerity policies, neoliberalism remains the dominant mode of economic governance in the world. What makes neoliberalism such a resilient mode of economic and political governance? How does neoliberalism effectively reproduce itself in the face of popular opposition?  States of Discipline offers an answer to these questions by highlighting the ways in which today’s neoliberalism reinforces and relies upon coercive practices that marginalize, discipline and control social groups. Such practices range from the development of market-oriented policies through legal and administrative reforms at the local and national-level, to the coercive apparatuses of the state that repress the social forces that oppose various aspects of neoliberalization. The book argues that these practices are built on the pre-existing infrastructure of neoliberal governance, which strive towards limiting the spaces of popular resistance through a set of administrative, legal and coercive mechanisms. Exploring a range of case studies from across the world, the book uses ‘authoritarian neoliberalism’ as a conceptual prism to shed light on the institutionalization and employment of state practices that invalidate public input and silence popular resistance.