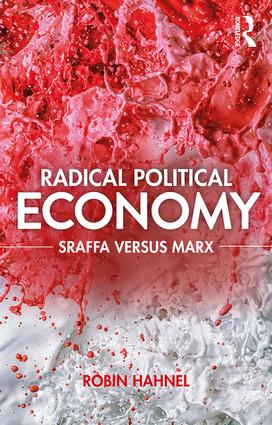 For too long radical political economy has suffered for lack of a coherent alternative to formal Marxian economic theory. People have had to choose between (1) continuing to use a formal model based on the labor theory of value as Marx developed in Capital to justify and retain one’s opposition to capitalism, or (2) abandoning the formal Marxian framework as outdated, and risk losing a critical evaluation of capitalism. Radical Political Economy: Sraffa Versus Marx provides readers with a third choice.

A point-by-point comparison of Sraffian and Marxian treatments of prices, profits, technological change, economic crises, environmental sustainability, and the moral case against capitalism, are presented in six core chapters. They explain how the Sraffian treatment surpasses the formal Marxian treatment in every case. Both Marxian and Sraffian theories are presented in a highly accessible way, while large professional literatures are thoroughly referenced throughout.

Marx was not the first, but remains the greatest critic of capitalism, and richly deserves his place in history. However it is time to use intellectual tools unavailable to Marx in the nineteenth century to improve upon his formal analysis. This book is of great importance to those who study Sraffa and Marx, as well as academics and students who are interested in political economy, the history of economic thought, and economic and philosophical theory.