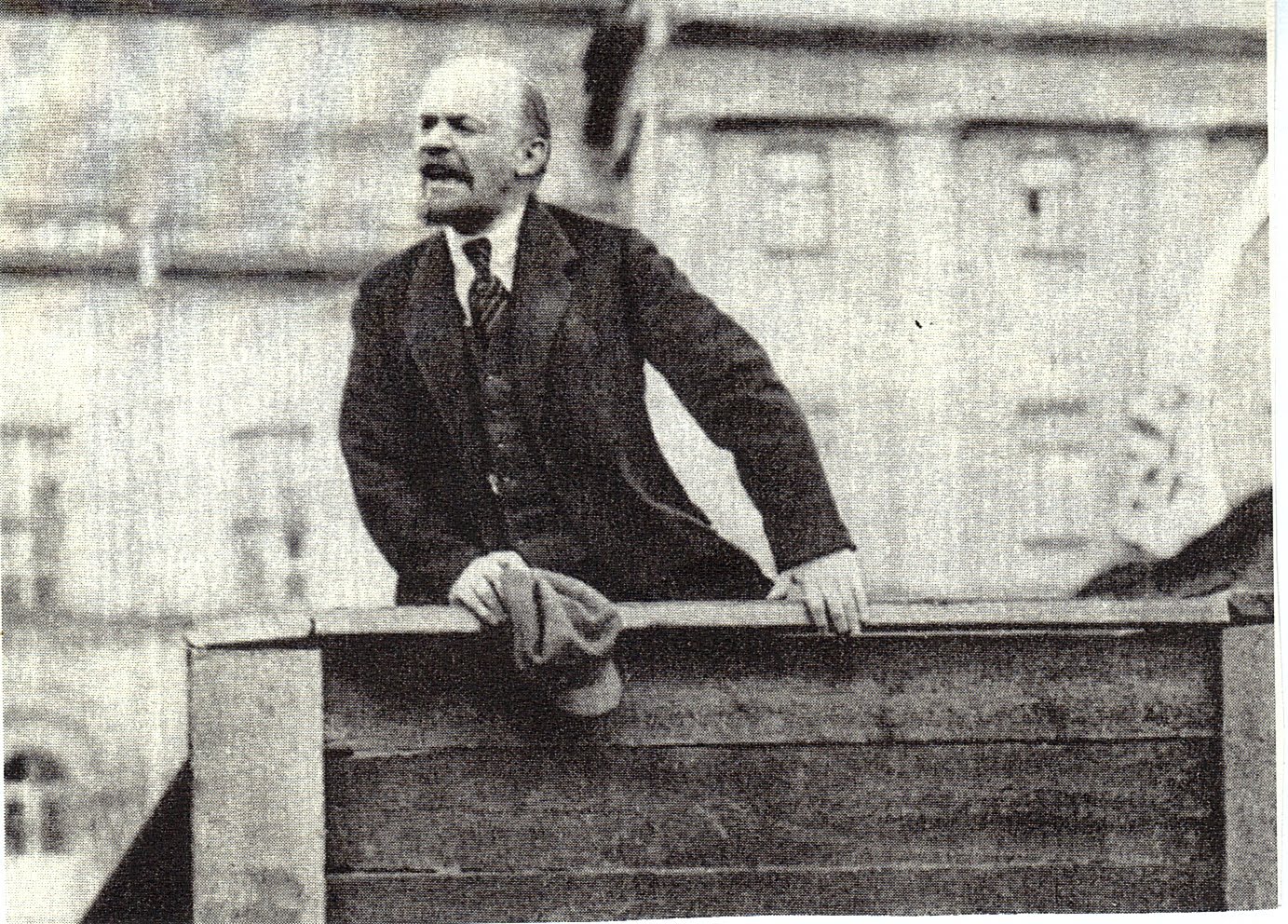 Paul Le Blanc is the author of numerous books, including Lenin and the Revolutionary Party and, most recently, Left Americana: The Radical Heart of U.S. History. In this speech presented in London in February at a conference about the Russian Revolution sponsored by the UK organization Counterfire, he considers the relevance of Lenin and the experience of Russia’s Bolsheviks for revolutionary socialists today.

Over the past decade, we have seen the academic-intellectual phenomenon of a striking increase in significant Lenin studies and related studies. Important contributions have come from Lars Lih, John Riddell, August Nimtz, Alan Shandro, Tamas Krausz, Antonio Negri and others.

Why is this happening? Such things would not be written or published if they did not speak to the deepening concerns of an expanding layer of potential readers. They would not be appearing if they were not–to borrow a capitalist term–marketable.

Such works are appearing in a period of ongoing economic, social and political crisis, with a decline in the quality of life generating the rise of protest and insurgency in many parts of the world. While it is hardly the case that a majority among the rising tide of rebels and activists embrace–or even have much knowledge of–Lenin, there are two essential connections.

The most elemental connection is this: At the very heart of the Bolshevik and Leninist tradition is the struggle against oppression. The proliferation of such struggles generates an atmosphere in which there is likely to be a growing interest in the revolutionary ideas and traditions associated with Lenin.

That relates to the other connection: Lenin and his comrades spoke to the most urgent concerns of those who hope to overcome oppression. Following Marx, they developed a profound understanding of the interconnection between the nature of oppression and the dynamics of capitalism, the dimensions of class struggle and the way it can develop into effective struggles for reform and revolution, and how socialists can organize themselves in a way to make this so.

AMONG LEFT-wing activists in recent years, on the other hand, even the term Leninism has been seen as problematical. For the most part, socialist organizations that consciously strive to follow a Leninist model are quite small and have little influence. But striving to follow this model and actually doing so are not the same thing.

I believe would-be Leninist organizations are unable to follow this model in part because of the very different objective reality in which we are enmeshed and in part because there are fundamental misunderstandings of what Leninism means–if we are referring to the “Leninism” of Lenin, his basic orientation and political practice.

One aspect of the present capitalist reality that we must understand–as Marxists, as Leninists, as Trotskyists–is that our world is quite different from what it was in the time of Marx, Lenin and Trotsky.

Some things that they emphasized had to do with a very different situation than the one we face. That affects the way I have viewed the Occupy movement, in which I was quite active, the Black Lives Matter movement, and now the amazing anti-Trump upsurge.

Lenin lived in a time when there was a massive international workers’ movement animated by a very high degree of class consciousness, with a highly organized and very large socialist (later Communist) component, nourished by a very rich and substantial labor-radical subculture.

That disintegrated under the impact of fascism, the Second World War and postwar developments. Proclaiming the truths of revolutionary Marxist theory in the latter years of the 20th century–as many of us were inclined to do–in the absence of a class-conscious labor movement will have a different impact than what was true in the time of Lenin.

(In a way, the reality of our labor movement, certainly in the U.S., seems to correspond more to that of Marx’s time in the early 1860s–very undeveloped and fragmented.)

Today’s working-class movement (like the modern-day working class) has been in a process of recomposition.

The Occupy movement involved large, very broad sectors of what were, for all practical purposes, working-class youth. Their protests against the tyranny of the 1 Percent over the 99 Percent resonated powerfully among a majority of the people of the United States–who are, in fact, working class but largely self-identify as “middle class.”

The inability of Occupy to cohere around a socialist program was inevitable. Those distressed by this had unrealistic expectations. Within this mass upsurge, however, socialists could be supportive, could participate, could help with practical and logistical matters and could share socialist ideas that some participants would consider further, particularly in the wake of Occupy’s inevitable collapse.

Such mass phenomena as the Occupy movement, the Black Lives Matter movement and the anti-Trump protests are part of a recomposition process of working-class protest, struggle and consciousness-building.

These are among the preconditions for the rebuilding of a working-class movement that can challenge the power of capital and, eventually, bring a socialist future. Instead of being impatient with these developments we should embrace them as part of the process which will allow for greater numbers to consider and draw strength from the insights of Marx, Lenin, Luxemburg, Trotsky and other revolutionary comrades.

WE DO not have a revolutionary party in the United States, although we badly need one, and some of us want to do what we can to bring that into being.

Groups in this category realize that: one, a revolutionary party can actually come into being only when a class-consciousness layer of the working class is prepared to move in that direction; two, there must be ongoing preliminary processes that will contribute to the crystallization of such a working-class layer; and three, the group must join with revolutionaries in other groups, with radicalizing activists who are not and will not be in the existing groups, and with people who at the moment are neither radicals nor activists, and that together–in the future–we will all be helping to forge the revolutionary party we need.

For a group viewing itself as the repository of Revolutionary Truth and aspiring to become the revolutionary party, democratic centralism tends to be defined in a restrictive manner. In order to preserve the group’s ability to become the unadulterated revolutionary party, a certain orthodoxy is established to which all must adhere, limiting discussion and generating a climate in which disciplinary actions and splits become all too common.

A healthy conception of democratic centralism involves a critical-mindedness, an openness, a political courage that characterized the way in which Lenin, Trotsky, Luxemburg and other such comrades functioned.

Shades of difference and outright disagreements are normal and necessary–especially given the complexity of the realities we face. That understood, it remains a fact that revolutionary socialists need to work together, as a democratic collective, to be effective in advancing the interests of the workers and the oppressed, creating the possibility of revolutionary party, and building a mass socialist movement that can bring revolutionary change.

In 1924, Trotsky wrote: “Without a party, apart from a party, over the head of a party, or with a substitute for a party, the proletarian revolution cannot conquer. That is the principal lesson of the last decade [since the 1917 Russian Revolution].”

Trotsky was contrasting the failures of socialist uprisings in Germany, Finland and Hungary to the success of the revolution in Russia. But in the 90 years since these words were written, it can be asked: “Hasn’t the sheer quantity of time changed the quality of this argument? Doesn’t a century of revolutionary history discount the tradition of Bolshevism?”

The answer to this is yes and no. It is true that things clearly cannot be just the same as they were 90 or 100 years ago. But certain aspects of the Bolshevik tradition transcend the amazing changes that have taken place over nine decades.

Jean-Paul Sartre once said the continued existence of capitalism means Marxism “remains the philosophy of our time,” since we have not gone beyond the circumstances that brought Marx’s analyses into being. I think similar points can be made about the Bolshevik tradition.

IN OUR discussions and debates about “Leninism,” we must never forget that the term has multiple and contradictory meanings.

Most people, of course, are not familiar with the term Leninism. Of those who have heard of it, many cannot give a definition.

Of those who could give a definition, there are some who would indicate that it is consistent with the practices and mindset of the bureaucratic-authoritarian and murderous tyranny that arose in Russia, particularly with the rule of Joseph Stalin. There are others who would associate it with the practices and perspectives of various left-wing sects proclaiming themselves to be “Leninist.”

A very small number, compared to the others just mentioned, see the “Leninism” of Lenin and his co-thinkers–in contrast to Stalinism and small-group sectarianism parading under the Leninist banner–as representing something important and necessary for the workers and the oppressed.

When some sincere people on the left announce that “Leninism is finished,” the “we” who constitute this small number feel compelled to say: “No, Leninism is not finished. It is unfinished.” Since it is our conviction that most people do not comprehend what Leninism actually is, we have a responsibility to explain–including why its history and meaning have been partly obliterated and partly distorted.

As with anything like this, there may be information and insights that some of some of us do not have, and differences among us on how best to understand what actually happened in history. There is a collective retrieval process of this historical Leninism that is far from complete, so in this sense Leninism is “unfinished.”

There is yet another way in which it is unfinished, and this relates to Lenin’s methodology.

Reality is dynamic and ceaselessly changing. There are always new things to understand, new analyses to be elaborated, revolutionary strategies that must be adapted to new situations, new tactics to be learned, and new ways to apply tried-and-true tactics. Our situation is not a duplicate of that faced by Lenin and the Bolsheviks, and our efforts to do what they did can only be successful if we are critical-minded and creative in our application of their approach.

This is a point Lenin often made in discussions with comrades in the various parties that belonged to the Communist International. It is truer now than ever before. In this sense, too, Leninism is–and must be–unfinished.

I WANT to conclude with the words of our comrade Rosa Luxemburg. In her important critique of the Russian Revolution, she emphasized a point that resonates today and has powerful implications for tomorrow’s struggles.

“In the present period,” Luxemburg wrote, “when we face decisive final struggles in all the world, the most important problem of socialism was and is the burning question of our time,” involving “the capacity for action of the proletariat, the strength to act, the will to power of socialism as such.”

In her opinion, “the party of Lenin…grasped the mandate and duty of a truly revolutionary party and…by the slogan “All power in the hands of the proletariat and peasantry” insured the continued development of the revolution. Whatever a party could offer of courage, revolutionary far-sightedness and consistency in an historic hour, Lenin, Trotsky and all the other comrades have given in good measure.”

The tragic failure of later years in no way wipes out their inspiring triumph of 1917. It remains for activists of today and tomorrow to revive and complete the work that Luxemburg describes. We must push forward to actually place political power in the hands of the laboring majority, and to actually replace capitalist tyranny with socialist democracy.

The contributions of Lenin and his comrades, critically utilized and developed, will be helpful to those engaging in that task.