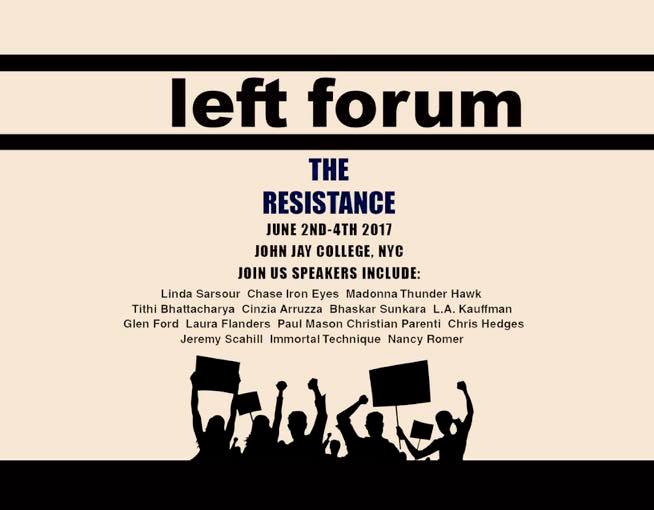 1) The Long Depression – a critique of the book by Michael Roberts<https://www.leftforum.org/sessions/long-depression-critique-book-michael-roberts>
Session 1. Saturday 10:00 – 11:50, Room 1.113
Jos? Tapia * Paul Mattick * Michael Roberts
Sponsored by the Union for Radical Political Economics
Since the end of the Great Recession in 2009, the major economies have been in a long depression, similar to that of the Great Depression of the 1930s and that of late 19th century.  So argues Michael Roberts in his book. He defines the differences between regular and recurrent recessions that capitalism experiences and depressions and argues that the underlying cause of crises under capitalism is to be found in Marx’s law of profitability and in the modern era in the expansion and overhang of debt (fictitious capital).  Roberts will present the arguments in the book and Paul Mattick Jnr, author of Business as Usual (the best short book on the Great Recession) and Jose Tapia, joint author of La Gran Recesion y el capitalismo del siglo XXI, will present critiques of Roberts’ book in a general discussion of the causes of crises and the current state of the world economy.

2) Cuban Political and Economic Reforms
Session 3. Saturday 3:30 – 5:15, Room 1.109
Peter Roman * Keith Bolender * Al Campbell
Sponsored by Socialism and Democracy and the Union for Radical Political Economics
1. Re-examining the US opening with Cuba under the Trump Administration 2. Cuba’s Economic Reforms – where they are at today. 3. Political Reforms proposed in Cuba

3) The Russian Revolution: Yesterday, Today, and Tomorrow<https://www.leftforum.org/sessions/russian-revolution-yesterday-today-and-tomorrow>
Session 4. Saturday 5:20 – 7:10, Room 1.124
August Nimtz Jr * Aleksandr Buzgalin * Gerald Meyer * David Laibman
Sponsored by Science&Society and the Union for Radical Political Economics
In October, Science&Society will publish a special issue commemorating the 100th anniversary of the Russian Revolution. Among its thoughtful and thought-provoking articles are the four offered in this panel. August Nimtz takes a close look at Lenin’s analysis and use of electoral politics. Alexander Buzgalin reveals the Revolution’s deep cultural awakening of activism and consciousness among the downtrodden and traces the contribution of “mutant socialism” to continuing human progress. Gerald Meyer reconsiders the complexity of Stalin as responsible for many of socialism’s greatest achievements while brutally repressing those who opposed his policies. David Laibman evaluates the revolution’s lasting effects on political thinking beyond romantic idealism and ritualistic pessimism.

4) Evaluation of Progressive Governments in Latin America in Recent Years
Session 4. Saturday 5:20 – 7:10, Room 1.108
Paul Cooney * Juan Kornblihtt * Enith Flores * Al Campbell
Sponsored by the Union for Radical Political Economics
Since the turn of the century there was a clear swing to the left in South America towards progressive governments and a push away from neoliberalism and towards a “new developmentalism”. As we now are in a period of reversal, where many of these governments have been replaced by conservative or right wing governments, it is important to carry out an evaluation of the advances and setbacks for these governments, in order to move forward from a progressive viewpoint. Some may consider the changes that took place as a crisis of the new developmentalist states and or those pursuing trajectories associated with alternatives to neoliberalism in South America. It is necessary to really examine to what extent there was a break from neoliberalism, and just how progressive these new governments have been. In addition to evaluating the experience of progressive governments in several countries of South America, we also consider the current situation in Cuba.

5) Iran and the Trump Era
Session 5. Sunday 10:00 – 11:50, Room 1.99
Hamideh Sedghi * Hamid Zangeneh * Reza Ghorashi
Sponsored by the Union for Radical Political Economics
The panelists discuss impacts and consequences of “Trumpism” on Iran. The challenges for Iran’s foreign policy, particularly in relation to its neighbors and the region, will be discussed by H. Sedghi.  Economic benefits of Iran’s nuclear deal, and potential negative consequences of breaking up the deal will be explored by H. Zangeneh. R. Ghorashi will talk about Iran’s presidential elections and the difficult task that the newly elected president will face.

6) Political Economy, Environmental Consequences and Crises
Session 6. Sunday 12:00 – 1:50, Room: 1.63
Paul Cooney * Jos? Tapia * Irwin Sperber
Sponsored by the Union for Radical Political Economics and Capitalism Nature Socialism
This panel examines the relationship between political economy and the environment; identifying environmental consequences, if not outright environmental crises. During the current period of neoliberal globalization, the increasing domination by transnationals, whose pursuit for ever-greater profits, comes at the expense of the environment. Several of the main areas of concern are that of global climate change, the related issue of deforestation, major problems of air, water and soil pollution, not to mention a range of other issues such as biodiversity. One of the areas addressed in this panel is that of reprimarization, particularly prevalent with the rise of China and the international context dominated by the WTO.  This is linked to the problems of deforestation, for example in the Amazon, but also the expansion of soy and mining with its subsequent deleterious effects for the environment. Another key area for discussion is that of the role of environmental NGOs, and their increasing connections to corporate interests, rather than an independent stance.

7) The Trump Regime: Same Old Neoliberalism or Something New?
Session 7. Sunday 3:40 – 5:40, Room: 1.117
Peter Bohmer * Stephen Pimpare * Peter Ranis * David Kotz
Sponsored by the Union for Radical Political Economics
How can we understand the Trump Regime – its economic policies, its social policies, its political appeals, its class base? What interest groups lie behind this regime? Does it represent a doubling down on neoliberalism, aiming to repeal the remaining social welfare programs and the environmental and public health restraints on business in the US while cutting taxes further for the rich? Or is something new emerging from the rhetoric of nationalism, the denunciation of “free trade,” and the racism, xenophobia, and misogyny of this regime?