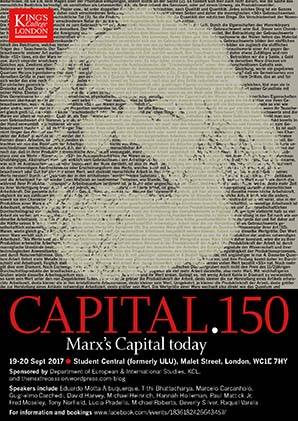 Karl Marx published the first volume of his life work, Capital: A Critique of Political Economy, in September 1867. Together with Volumes II and III, published after Marx’s death by Friedrich Engels, this book remains the most profound and challenging study of the logic of the capitalist system that still dominates our lives.

150 years after the first appearance of Capital Volume I, that system is grappling with the effects of one of the greatest crises in its history and the resulting political instability. Many have turned to Marx’s Capital seeking to understand the present conjuncture. But Marx never finished this work, and the recent publication of his manuscripts has revealed both the immensity and the complexity of his project.

Within walking distance of the British Museum, where Marx conducted his research, this conference seeks to interrogate his project in the light of the present. It brings together from around the world some of the leading practitioners in the Marxist critique of political economy to explore the relevance of Capital to issues such as crisis, imperialism, social reproduction, class struggles, and communism. The conference is organized with the aim of maximizing debate that can help clarify what Capital means today.