New Book: The Knowledge We Have Lost in Information – The History of Information in Modern Economics 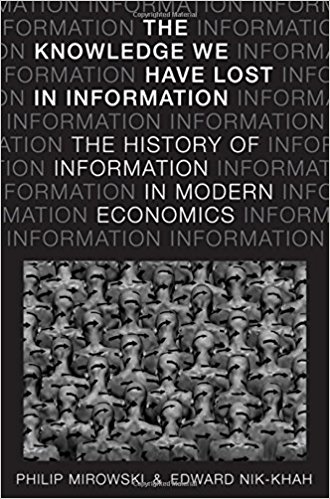 Information is a central concept in economics, and The Knowledge We Have Lost in Information explores its treatment in modern economics. The study of information, far from offering enlightenment, resulted in all matter of confusion for economists and the public.

Philip Mirowski and Edward Nik-Khah argue that the conventional wisdom suggesting “economic rationality” was the core of modern economics is incomplete. In this trenchant investigation, they demonstrate that the history of modern microeconomics is better organized as a history of the treatment of information. The book begins with a brief primer on information, and then shows how economists have responded over time to successive developments on the concept of information in the natural sciences. Mirowski and Nik-Khah detail various intellectual battles that were fought to define, analyze, and employ information in economics. As these debates developed, economists progressively moved away from pure agent conscious self-awareness as a non-negotiable desideratum of economic models toward a focus on markets and their design as information processors. This has led to a number of policies, foremost among them: auction design of resources like the electromagnetic spectrum crucial to modern communications.

The Knowledge We Have Lost in Information provides insight into the interface between disputes within the economics discipline and the increasing role of information in contemporary society. Mirowski and Nik-Khah examine how this intersection contributed to the dominance of neoliberal approaches to economics, politics, and other realms.