The Significance of Marx’s Theory of Money 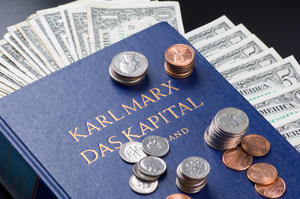 Marx’s theory of money was integral to his analysis of capitalist dynamics. The rich potential of Marx’s analysis of money has, unfortunately, not received the attention it deserves both by political economists and by those who have been inspired by Marx’s political vision.

One problem is that Marx has for a long time been regarded simply as a “theoretical metallist” (Schumpeter 1954: 288). His highly abstract formulation of the origins of money in the commodity form, as “commodity-money,” has been seen as largely irrelevant to contemporary capitalism where money no longer takes the shape of a commodity like gold or silver but is tied/linked to the monetary liability of the state. But Marx’s copious notes from a wide array of sources from newspapers, journals like the Economist, to parliamentary reports on Commercial Distress and the Banking Act, are evidence that he engaged deeply not only with the monetary theorists of his time (including David Ricardo, Thomas Tooke and John Fullerton) but also with the concrete institutional workings and social foundations of the financial system. The precise link between money and the credit system in Marx’s framework thus needs elaboration.

A second difficulty arises in that Marx never fully fleshed out his analysis of the credit system. Part Five of Capital, Volume III, which brings together Marx’s writings on the credit system, was edited by Friedrich Engels posthumously. Engels bemoaned the fact that there was no “finished draft or even an outline plan to be filled in, but simply the beginning of an elaboration which petered out more than once in a disordered jumble of notes, comments and extract materials” (Marx 1981: 94). In this sense, Marx’s writings on the credit system in Volume III are as Brunhoff (1976) notes “more stimuli to thought than constituent elements of a completed theory.” Developing such a complete theory remains a challenge even today, 150 years after the first publication of Capital.

While this article does not quite take up this challenge, it does attempt to delineate the critical elements of Marx’s theorisation of money and highlight its continued relevance to contemporary capitalism. Marx’s theory of money, as will be evident from the presentation below, is inseparable from the rest of his analysis of capitalist dynamics. Nevertheless, for considerations of space and clarity of exposition, many significant pieces of Marx’s larger theoretical canvas will be ignored, along with the debates surrounding these. The presentation of Marx’s theory of money in this article has been influenced, in particular, by the work of Brunhoff (1976, 2005) and Duncan Foley (1983, 1985, 1986, 2005).