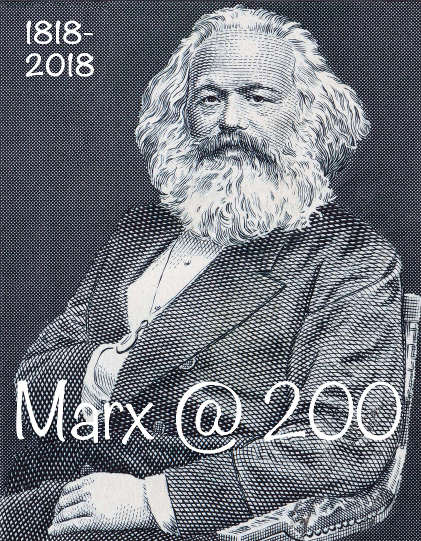 The special issue’s main section will feature a debate between David Harvey and Michael Hardt/Toni Negri, who will engage in a dialogue about Marx today and the relevance of praxis and Marx’s theory for the critique of contemporary capitalism.

We invite the submission of abstracts (max. 250 words) for reflections on the following questions:
– How can Marx’s theory help us to understand capitalism today?
– 200 years after Marx’s birth, what type of capitalism do we live in today? What kind of and what focus of Marxian analysis and praxis do we need to analyse and criticise capitalism?
– On which elements of Marx’s theory and the 200-year long history of Marxian theory can we today best draw in order to advance radical theory, the analysis of capitalism and struggles for alternatives to capitalism?

The new capitalist crisis emerged in 2008 and the subsequent resulting political-economic and ideological regimes of austerity, accompanied by the rise of new nationalisms and authoritarian forms of capitalism, gave new momentum to critical analyses of contemporary capitalism. These critiques are not limited to sociological debates, but are starting to penetrate the public arena and mainstream discourse. Current debates focus on the possibility to envision alternatives to rather than alternatives of capitalism. In light of this, a re-examination of Marx’s legacy becomes essential. Talking about Marx means, in fact, talking about class, capitalism, reproduction of economic and social inequalities, crises, and alternatives to capitalism.

Marx laid the foundations for the critique of capitalism’s political economy. His approach has been used as foundation for the critical theory of capitalism and its economic, political and cultural systems, its technological paradigms, the human/nature relationship, as well as aspects of subject/object, time and space in capitalism. Marx’s approach is inherently critical, which means that it analyses the contradictions of capitalism, its crises tendencies, its struggles and the foundation of alternatives to it. 200 years of development of Marxian theory have resulted in numerous approaches, strands, interpretations, debates, and conflicts. Radical scholars are called to engage and make an effort to advance theoretical perspectives allowing a renewed understanding and critique of contemporary capitalism.

Deadline for abstract submission: November 15, 2017 (250 words, per e-mail to Denise Rose Hansen, managing editor of tripleC: d.hansen@triple-c.at, please include a submission title, your name and contact, a 100 word short bio, and an abstract of 250 words; send the abstract and meta-data in a Word- or text-file [not in a plain e-mail]).

Acceptance decisions: Until approx. November 30, 2017
We aim to include around 10-15 reflections. Naturally, if the number of submissions is high, the editors will have to make a selection.

Submission of full reflection articles (maximum of 5,000 words, including all references, footnotes and tables): January 30, 2018

In addition to the special issue that will be online and open access, the editors plan to publish the contributions as a book in 2019.