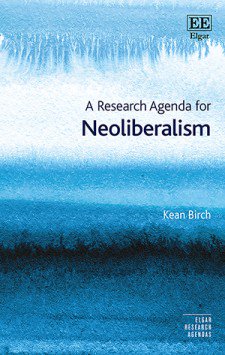 By Kean Birch. From Edward Elgar:

At a time when neoliberalism has become an accepted term in public debate to refer to the current state of modern societies and their political economies, Kean Birch critically analyses the conflicting theories that shape our understanding of ‘neoliberalism’.

With an ever-expanding variety of perspectives on the concept of neoliberalism, it is increasingly difficult to identify any commonalities. This book explores how different people understand neoliberalism, and the contradictions in thinking of neoliberalism as a market-based ethic, project, or order. Detailing the intellectual history of ‘neoliberal’ thought, the variety of critical approaches and the many analytical ambiguities, Kean Birch presents a new way to conceptualize contemporary political economy and offers potential avenues for future research through a judicious exploration of ‘neoliberal’ practices, processes, and institutions.

This work will be an essential resource for undergraduate and postgraduate students, scholars, and researchers to critically assess the concept of neoliberalism across many disciplines. The book will also serve as a general introduction to a wider audience interested in the term ‘neoliberalism’, its potential pitfalls, and its contested future.