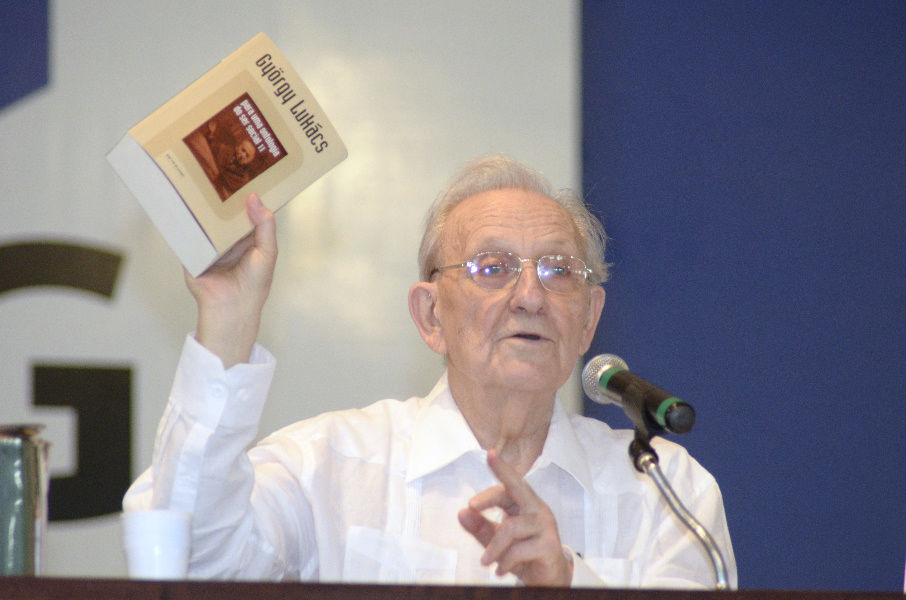 Istvan Meszaros was an eminent and celebrated Marxist philosopher who played a huge role in introducing Marx’s theory of alienation to a new generation of Marxists in the 1970s. Meszaros’s writings are richly theoretical and indispensable for those interested in Marxist philosophy. Meszaros was an assistant to the great Hungarian Marxist, Georg Lukacs, before leaving Hungary in protest against the Soviet invasion of 1956. Meszaros responded to the publication of Marx’s Economic and Philosophical Manuscripts, written in 1844 but not published until the 1930s by illuminating the origins of the Marxist method. In particular, Meszaros developed Marx’s previously neglected theory of capital as an alienated from of the labour process, the ‘social metabolism’ between man and nature. Meszaros’s Marx’s Theories of Alienation was also a polemic against those who, under the influence of Stalinism, argued that Marx’s early works were should be dismissed as idealistic rather than materialist, and that Marx had abandoned his earlier concepts, including that of alienation. This is why Meszaros goes to some length to trace the continuities between the Manuscripts of 1844 and Lenin’s writings in this complex, challenging and rewarding study.

The origins of Marx’s theory

Meszaros writes that the ‘concept of alienation belongs to a vast and complex problematics, with a long history of its own’. He traces how Marx’s ideas on alienation developed in relation to earlier religious concepts of ‘alienation from God’ and discrimination between ‘my people’ and strangers, or ‘aliens’. Both Judaism and Christianity, Meszaros writes, express attempts to overcome the internal contradictions of class society in which different sections of society pursue their own, partial interests, at the expense of the good of society as a whole. Religions explicitly described alienation from God and from strangers. They also expressed the experience of and desire to transcend alienated society. Religions sought this solution in the existence of a universal being, a god. Marx sought the solution in the practical activity of human beings.

Feudal society placed limits on free trade with numerous complex taboos and prohibitions. Capitalist forms of production strained against these hindrances and restrictions. ‘The sacred pillars of the old social order,’ such as land and labour, had to become saleable so the commodity production could develop without restraints. Rigidly fixed feudal relations were replaced with free labour, which in practise had to sell itself to the masters. Meszaros points out that the advocates of rising capitalism glorified ideas of ‘liberty’ and ‘contractually safeguarded freedom’. However, critical philosophers including Immanuel Kant pointed out that while objects could now be alienated, or sold to others, for labour to be sold required the reification of the living person into a piece of property. Marx described how, ‘Selling is the practice of alienation.’ Alienation is therefore characterised firstly by the transformation of everything into a commodity and secondly by the conversion of human beings into objects that can appear as commodities on the market.

From God to humanity

Ideas about alienation were first expressed in religious thought. However, during the great upheavals of the 18th century, philosophers developed critiques of religion. Meszaros quotes French philosopher, Diderot, who emphasised that once people had succeeded in opposing the ‘majesty of heaven’ they would turn their assault on ‘worldly sovereignty’. Anthropology, the study of humanity, challenged religion as the focus of investigation into alienation. The radical French philosopher Emile Rousseau denounced alienation located in the rise of money and wealth increasingly concentrated in the hands of an elite while the poor sold themselves and became dehumanised mercenaries. He also emphasises humanity’s alienation from nature which enabled vice and evil to flourish in large towns where people are isolated from nature and the growth of ‘artificial needs’ and ‘useless desires’. However, Rousseau’s concept was a moral, legal one, focused on the idea of the ‘Social Contract, one which failed to take account of the relations of production in society or to identify a social force capable of superseding alienation.

Meszaros emphasises how Marx transformed the theory of alienation by adopting the standpoint of labour. In his Economical and Philosophical Manuscripts of 1844, Marx developed the idea of ‘labour’s self-alienation’. Before reaching this understanding, Meszaros suggests, Marx had been unable to grasp in a comprehensive way the complex hierarchy of the various kinds and forms of human activity. The concept of labour provided Marx with the solution. People are part of nature, and therefore, must produce to sustain themselves, to satisfy their needs. However, they can only satisfy these needs by necessarily creating a complex hierarchy of non-physical, or spiritual, needs which thus become necessary conditions for the gratification of the physical needs. The need to labour on nature to satisfy human needs was the only consistent feature of all human societies.

Labour mediates between people and nature, but capitalist production means that the relationship between humanity and the natural world is dominated by private property, the exchange of commodities and the division of labour. Marx’s descriptions of this process in the Manuscripts are extremely powerful indictments of the system:

Capital makes universal the partial tendencies visible in previous class societies. Capital is based on the seizure of the means of production and on severing the connections between workers and nature and workers and their own labour. In his Manuscripts, Marx identified four specific ways in which alienation pervades capitalist society.

One: We are alienated from what we produce because it is owned and disposed of by another, the capitalist. In all societies, people use their creative abilities to produce objects which they use, exchange or sell. Under capitalism, however, this becomes an alienated activity. Marx argued that the alienation of the worker from what he produces is intensified because the products of labour actually begin to dominate the labourer. Firstly, the worker is paid less than the value he creates. A proportion of what he produces is appropriated by his boss; the worker is, therefore, exploited. Qualitatively, he also puts creative labour into the object he produces, but he cannot be given creative labour to replace it.

Two: We have no control over the process of production, over the conditions in which we work or over how it affects us physically and mentally. The process of work is not only beyond the control of the workers, it is in the control of forces hostile to them because capitalists and their managers are driven to make us work harder, faster and for longer stints. Workers are treated as machines, with the aim of transforming the subjective element of labour into objective, measurable, controlled processes.

Three: We are alienated from our fellow human beings. We are alienated from those who exploit our labour and control the things we produce. Our lives are touched by thousands of people every day, people whose labour has made our clothes, food, home, etc. But we only know them through the objects we buy and consume. We see other people through the lens of profit and loss. Our abilities and needs are converted into means of making money and so we consider other human beings as competitors, as inferiors or superiors.

Four: We are alienated from what Marx called our species being. For Marx, human nature is not fixed, it is not the egoistic nature so beloved of political economists. Rather, humanity can only be understood in relationship to a dynamically changing nature. What makes us human is our ability to consciously shape the world around us. We have the ability to act collectively to further our interests. However, under capitalism that ability is submerged under private ownership and the class divisions it produces. We have the ability to consciously plan our production, to match what we produce with the developing needs of society. But under capitalism that ability is reversed by the anarchic drive for profits. Thus, rather than consciously shaping nature, we cannot control, or even foresee, the consequences of our actions.

Capitalism is the first system of generalised commodity production. Commodities must have a use value, but they also have an exchange value. In capitalist society our many different human needs can only be met through the purchase of commodities. Commodities are circulated on the market and exchanged for money, which, in turn, is exchanged for other commodities. In the capitalist system, individuals have to possess certain things – labour power, or materials of production, for example – in order to enter into productive relationships with each other. The creation of exchange values and the circulation of commodities require a commodity which can represent all other commodities, through which all other commodities can be compared. Marx identified that as commodity as money – the ‘universal pimp’. As Meszaros explains:

‘Money is taken to possess these colossal powers as natural attributes. People’s attitude toward money is, undoubtedly, the outstanding instance of capitalist fetishism, reaching its height in interest-bearing capital. Here, people think they see money creating more money, self-expanding value… workers, machines, raw materials – all the factors of production – are downgraded to mere aids, and money itself is made the producer of wealth’.

Alienated labour generates alienated consciousness and what Meszaros calls, ‘The mystifying cult of the abstract individual’. Meszaros describes how we cannot escape into our private lives, however powerful the illusion: ‘The cult of privacy and of individual autonomy thus fulfils the dual function of objectively protecting the established order against challenge by the rabble, and subjectively providing a spurious fulfilment in an escapist withdrawal to the isolated and powerless individual who is mystified by the mechanisms of capitalist society which manipulate him’. Alienation can only be overcome by collective action which challenges capitalist relations of production and reproduction.

The alienation of humanity means loss of control. Alienation is not a result of a powerful outside agency but a historical development which can be challenged and transcended by the conscious activity of human beings. When capitalism was ascending, there was a formerly unimaginable increase in productive powers. There has also been a dangerous multiplication of the powers of destruction, of wars and climate destruction. In 2004 in a new introduction to Marx’s Theory of Alienation, Meszaros wrote: ‘This is why it is imperative to face up to the great challenge of capital’s global uncontrollability in our time, before it becomes too late to do so. The historical urgency of the critique of alienation, in the Marxian spirit, could not be greater than it is today’.