New Book: On New Terrain – How Capital is Reshaping the Battleground of Class War 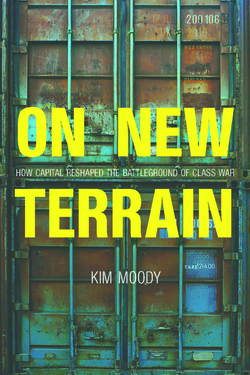 By Kim Moody. From Haymarket Books:

In his latest book, Kim Moody analyzes how recent changes in capitalism have altered both the composition of the working class and the economic and political ground on which it struggles.

On New Terrain challenges conventional wisdom about a disappearing working class and the inevitability of a two-party political structure as the only framework for struggle. Through in-depth study of the economic and political shifts at the top of society, Moody shows how recent developments in capitalist production impact the working class and its power to resist the status quo. He argues that this transformed industrial terrain offers new possibilities for organization in the workplace and opens doors for grassroots, independent political action strengthened by reemerging labor and social movements.

From the logistics revolution to the unprecedented concentration of business and wealth in the hands of the one percent, On New Terrain examines the impact of the current economic terrain on the working class in the United States. Looking beyond the clichés of precarity and the gig economy, Moody shows that the working class and its own self-activity are essential in the global battle against austerity.