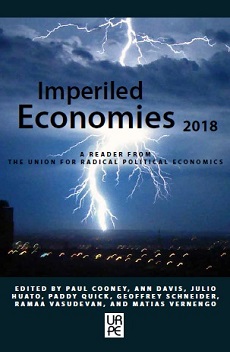 Imperiled Economies consists of articles that introduce readers to current work in the field of radical political economics. The Union for Radical Political Economics (URPE) is an interdisciplinary membership organization of academics and of activists. Founded in 1968, its mission is to promote the study, development and application of radical political economic analysis to social problems. Concretely this involves a continuing critique of both the capitalist system, and of all forms of exploitation and oppression. URPE[s mission also includes, coming out of this critique, helping to construct a progressive social policy, and a human-centered radical alternative to capitalism. URPE is open to a wide range of theoretical perspectives, including Marxist, post-Keynesian, Sraffian, feminist, and others. We are united in our opposition to the neo-liberal policies that have been imposed on the working people of the world, and are committed to exposing the neo-classical analysis that is used to justify them.

Authors were asked to submit short articles for this volume that would be accessible to a general audience. The articles selected for inclusion were chosen to illustrate the wide range of both theoretical, political, and methodological perspectives within URPE. Thus they do not pretend to constitute either surveys of the literature or definitive positions on the various issues we confront. Instead, they are intended to contribute to the dialogue that is necessary in these difficult times, and thus promote the activity necessary to address them.

Critique of neo-classical economic theory constitutes a major theme in the book, including the question of what determines the long-run rate of growth of production, and the associated issue of crises and unemployment.

More short-term issues are of crucial importance when policy makers seek to enact austerity policies, as we have seen in Greece, East Asia, and Latin America, and in the general question of national debt. The limitations of neo-classical analysis are also laid bare in articles that address health and harmful operations of political systems.

Another major theme is the rapidly growing threat of catastrophic climate change. It is essential to integrate an understanding of this ecological perspectives into both theory and practice.

Criticism of the existing structures of society inevitably contains an explicit or implicit presentation of alternatives. Some take us beyond consideration of relations of production to those of gender and race, and introduce us to the more general goal of human development.