For a Radical Re-foundation of Europe 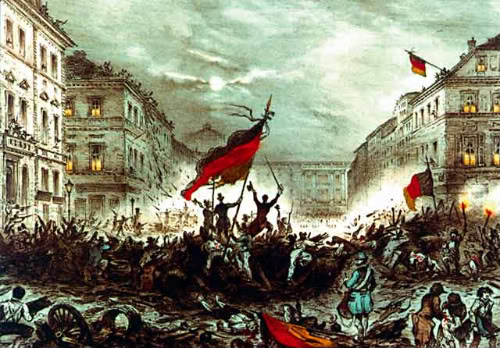 From the beginning of the modern era up till the mid-twentieth century, Europe imposed its domination on the whole planet. It was from this that it drew its wealth, and it was thus that it lay the bases of its civilisation. But Europe is today “provincialised,” or more accurately, it has taken up a place at the semi-periphery of the world economy and world history. It has been marginalised from the “great game,” the fight for hegemony today playing out between Asia and America. It remains outside the zones of super-exploitation and death which are situated to the South and East of the Mediterranean, even though it is also implicated in these regions on account of its investment, its armed intervention, its border operations, and population movements.

If we do not want our work and our lives to be mobilised as a simple reserve force for the latest war for hegemony; if we want Europe to have real weight in defining the norms of international law, and in establishing the protection systems necessary to preventing environmental devastation and the gradual destruction of life on Earth; and if, finally, we want to impose banking and trade rules that allow the defence and adaptation of the “European social model”; then we will need a lot more than regulatory coordination or an exclusively financial governance, such as they exist today. Rather, we need political unity and an institutional representation of the general interest — though this does not of course mean unanimity without opposition or diversity. As things stand, we are very far from this…

The European Union is caught in a double bind. Its community of interests and legal norms is expressed in a quasi-federal structure which is today almost irreversible. Indeed, we saw already the impossibility of expelling Greece from the Eurozone, and we can now see the impossibility of the UK leaving the EU undamaged. But we also have a conjunction of mounting, socially destructive inequalities together with an ungovernability that can no longer hidden behind “changes of government” [alternance] or “grand coalitions” among centrist parties; a technocratic authoritarianism which produces an ever more unbridgeable gulf between rulers and ruled; and nationalisms who pose a common violent threat to a supposed “enemy within.” All these are factors driving toward an existential crisis in Europe’s political forms.

Yet this developing crisis is not helping to produce any kind of “revolutionary situation” or “coming insurrection,” as old anarchists and young visionaries sincerely believe. Rather, it is feeding the decomposition of citizenship. The disoriented European Union can only wait for the next financial crisis to see if — as some are already predicting — it will meet the same fate as the Soviet Union. That is why among the political class and among experts at the moment there is so much discussion of the need for a “refoundation” of the EU. I do not reject this term. On the contrary, I think that we should give the word its full meaning.

The most coherent project today is the one being advanced by the French president Emmanuel Macron. This consists of “strengthening the core of the EU” around those Eurozone countries who would agree to directing a larger part of their resources toward a pooled European budget, or even a European Monetary Fund, subject to a tighter public-debt discipline. This project would thus go hand-in-hand with the official recognition that we have a “multi-speed” Europe.

Since such a project would mean giving our blessing to the quasi-sovereignty of the financial institutions, it would also be necessary to impose democratic correctives able to confer an extra measure of legitimacy upon this sovereignty. The promoters of such a project imagine it in the form of a specific parliamentary representation, either added on to the European Parliament, or else as the emanation of national parliaments.

Some Nations are Hegemonic

I well understand the quite rational argument that one might invoke in support of such a plan: it holds to the idea that economic government — consistent with a tendency that has been present ever since the construction process in the post-WWII period — is the pivot around which all of Europe’s “governance” gravitates. Hence the social and institutional consequences of integration. It is thus also a way of recognising that in the era of financial globalisation, the economic and the political are not really separate “spheres.” The consequence of this is that an advance toward federalism which is not based on the unification of economic policies (and of their monetary base) has no chance of materialising. That much is true. But it is far from sufficient for ensuring the reciprocal function, i.e. the political control of economic governance in forms that are sufficiently democratic to establish the legitimacy of the “sovereign.”

This project in fact entails two major disadvantages. The first is that it keeps citizen representation as an only consultative function, where the logic of decisions “demanded” by the conjuncture and “ratified” by the board of directors cannot truly be discussed and challenged. The second is that it establishes a fresh divide between different shades of belonging to the European Union, and thus sows the seeds of resentment and the strengthening of nationalisms within the EU. This is not a refoundation, but an aggravation of the existing tendencies toward the concentration of powers and the hegemony of certain nations over others.

In truth, while the idea of a refoundation is indeed a pressing demand, we have to imagine it in a more radical way. We should not just settle for bolstering certain powers or delegating certain nations the responsibility to give a lead to the others. We have to ask ourselves what the political conditions for a historic refoundation of the EU would be.

I think that we can name at least five such conditions: they are each qualitatively different, but they will not be effective unless they are closely combined with one another. The first is the material interest of the European peoples — or the large majority of them — in constituting an active whole, in the world today, faced with the tendencies and the power struggles of globalisation. This must allow it to transform power relations to the benefit of citizens. It seems to me that this material interest coincides with the strengthening of a Europe that carries forth a project for an “alter-globalisation,” particularly as regards the domain of financial regulation and environmental safeguards. And the tragic needs of the present also demand that Europe takes on a renewed capacity for mediation, amidst the multiple both declared and undeclared wars that rage both in faraway regions and closer to us. This demands the revitalisation of international law.

The second condition is an institutional objective, or historic innovation. The goal would be finally to break us out of this state of pseudo-federation. This federation already exists in the form of a close interdependency among economies, territories and cultures. But it is denied by the official discourse, and daily contradicted by the way in which national political classes try to preserve their own monopoly of negotiation with “corporatist” powers and administrations, be they big companies or unions. The goal must be to invent a new type of federation that does not abolish nationality, but rather transforms its meaning and its functions within the framework of a shared sovereignty.

The third condition is a political ideal by which the goal of federation can orient itself, and which can be a yardstick for its success … We have to seek a widening of democracy relative to the level that nation states reached in their highest moments of active citizen engagement. There will be no European federation if the emergence of executive, administrative, and judicial powers, representative even beyond the level of national sovereignty, is not accompanied by a renaissance in local and everyday forms of direct participation (which some today call assemblies). These latter must not be isolated and closed in on themselves, but rather well-equipped to communicate across national borders. Of course, such an innovation cannot be decreed in some authoritarian fashion. Rather, it must overcome gigantic obstacles and opposition, which are not all simply a matter of social conservatism. That is what leads me to the final two conditions.

The fourth is an effective demand for refoundation. We might think ourselves very far from that, in this period of nationalist reaction and disaggregation. But we have no reason to decree it impossible a priori. This refoundation cannot simply be a matter of pro-European sentiments or delegating power to governments. Rather, we need collective movements involving citizens, with their various different kinds of heritage, able to join hands across borders. They can either be movements of protest (for instance, against injustice and tax evasion) or movements that begin irresistible cultural revolutions (for instance, a transformation of self-destructive modes of production and consumption).

Finally, the fifth condition — which attempts to bring together the previous four — is the definition of the political problems that must be resolved if the European project is to become not just desirable, but even possible. So the question is the definition of the “battles” that citizens will wage, or even — in less belligerent fashion — the “campaigns” that they will undertake, so that the obstacles the European project is running into will become so many terrains for mobilisation, communication and initiative.

That first of all means the reduction of all the forms of inequality (of profession, of generation, of location, of education, of healthcare, of security, of gender, of race…). These inequalities are aggravated by the triumph of the principle of “free and undistorted competition” over the values of solidarity. And this has ruined the very possibility of a political community. Of course, the same also goes for confronting the new national question in Europe. This continent is heir to a long history of domination and antagonism, but it has also been completely transformed since the states on both sides of the Berlin Wall became “welfare” as well as “national” states. It also goes for what I called — following Kant and Derrida — the “challenge of hospitality.” Which, to be clear, means a certain treatment of present and future population movements, in which human fraternity and cooperation with the nations of the Global South each find their proper place.

Soaring inequalities, unfortunate identities, outsourced populations: so many questions that must be confronted in order to drive a collective advance and make Europe a historical actor bringing together multiple faculties of civic action. More than a Jean Monnet, a Charles de Gaulle or even a Willy Brandt, I think that what we need is an Altiero Spinelli or an Ursula Hirschman, but ten fold or more, and capable of writing something like a new Ventotene Manifesto [federalist document drafted by Spinelli and fellow anti-fascist Ernesto Rossi in internal exile on the island of Ventonene, in 1941]. And we need to bring its inspiration together with what the world is today expecting from Europe.