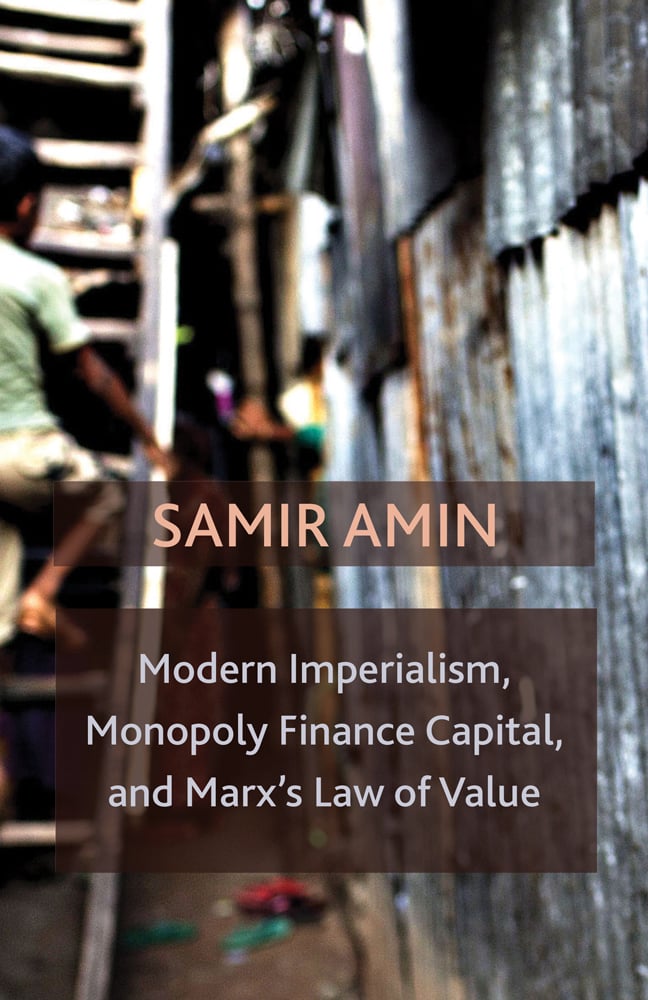 Unlike such obvious forms of oppression as feudalism or slavery, capitalism has been able to survive through its genius for disguising corporate profit imperatives as opportunities for individual human equality and advancement. But it was the genius of Karl Marx, in his masterwork, Capital, to discover the converse law of surplus value: behind the illusion of the democratic, supply-and-demand marketplace, lies the workplace, where people trying to earn a living are required to work way beyond the time it takes to pay their wages. Leave it to the genius of Samir Amin to advance Marx’s theories—adding to them the work of radical economists such as Michal Kalecki, Josef Steindl, Paul Baran, and Paul Sweezy—to show how Marxian theory can be adapted to modern economic conditions.

Amin extends Marx’s analysis to describe a concept of “imperialist rent” derived from the radically unequal wages paid for the same labor done by people in both the Global North and the Global South, the rich nations and the poor ones. This is global oligopolistic capitalism, in which finance capital has come to dominate worldwide production and distribution. Amin also advances Baran and Sweezy’s notion of economic surplus to explain a globally monopolized system in which Marx’s “law of value” takes the form of a “law of globalized value,” generating a super-exploitation of workers in the Global South. Modern Imperialism, Monopoly Finance Capital, and Marx’s Law of Value offers readers, in one volume, the complete collection of Samir Amin’s work on Marxian value theory. The book includes texts from two of Amin’s recent works, Three Essays on Marx’s Value Theory and The Law of Worldwide Value, which have provoked considerable controversy and correspondence. Here, Amin answers his critics with a series of letters, clarifying and developing his ideas. This work will occupy an important place among the theoretical resources for anyone involved in the study of contemporary Marxian economic and political theory.