Call for papers: Democracy on the Edge? Revisiting Neoliberalism & Democracy in Contemporary Capitalism 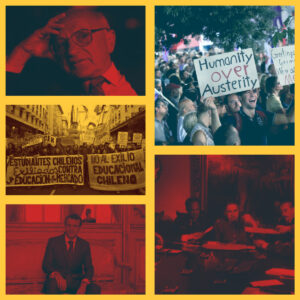 The relationship between neoliberalism and democracy has always been one marked by tension and contradiction. While early experiments with neoliberal reforms were instigated by military dictatorships in South America, more recent developments in global capitalism have raised questions regarding the implications of neoliberal reforms implemented in democratic countries. Ongoing uncertainties over the stability of capitalism since the Global Financial Crisis have precipitated deepening crises of neoliberalism. This is especially so when understood in conjunction with inequalities laid-bare by the Crisis and mounting contradictions of global migration and ecological degradation. In this context, popular discontent with the neoliberal status quo and establishment political institutions has been co-opted by far-right movements to challenge both liberal democratic norms and key institutions of global capitalism erected over past the half-century. In turn, Francis Fukuyama’s notorious invocation of the ‘end of history’ and ultimate triumph of liberal democratic capitalism following the end of the Cold War appears more problematic than ever.

However, the implications of this lingering crisis of neoliberalism for democracy are far-from-straightforward and pose pertinent political economic issues for consideration. For instance, while it remains easy to dismiss the ideologically-contrived character of Fukuyama’s thesis, when faced with myriad contradictions in neoliberal capitalism, politicians, business leaders, and liberal intellectuals and social movements largely continue to insist that there is ‘no alternative’. Notwithstanding important counter-hegemonic actions since the GFC, why has persistent political economic instability not been effectively mobilised to repoliticise the economy in an alternative direction? Why, instead, has it been predominantly used to reinforce the political imperative to introduce technocratic and ‘economically responsible’ policies to foster market processes? Have such policies served to insulate or depoliticise economic processes from even limited forms of democratic accountability?

A related, albeit no-less contentious theme relates to the foundational relation between neoliberalism and democracy and its contemporary manifestations. How has the notion of ‘democracy’ itself been understood, institutionalised and restricted to liberal forms of representation under neoliberalism? Have the persistent contradictions and unequal outcomes arising from the GFC engendered a crisis in the legitimacy of neoliberal institutions despite neoliberal practices remaining central to state policy practice? Does the (re-)emergence of right-wing populist political forces promulgating nationalistic programs – both within and beyond the state – present a fundamental challenge to the global accumulation processes characterising neoliberalism? Conversely, are they ultimately compatible with one another in the form of an ‘authoritarian neoliberalism’? More fundamentally, does the current conjuncture demonstrate that neoliberalism is inherently incompatible with democracy, with the latter merely a rhetorical shell designed to legitimate the former, while rising authoritarian capitalist states constitute the ‘true’ face of neoliberalism? Or should democratic processes and discourse be understood as more fundamental to securing the hegemony of neoliberal capitalism, such as through ‘post-political’ practices in which democratic processes are implicated in the sublimation of social antagonisms? Finally, should the growth of populist movements – both left- and right-wing – be understood only as a symptom of the crisis of neoliberalism, or can it also be envisaged as a solution for the re-invigoration of democracy?

This special issue of the Journal of Australian Political Economy seeks to consider such questions in the context of Australia in particular, as well as global capitalism more broadly. Papers might explore how a critical political economic analysis of the complex relations between neoliberalism and democracy can be used to illuminate important themes such as:

This list is illustrative rather than exhaustive and authors are encouraged to submit manuscripts on any theme relevant to the political economy of neoliberalism and democracy in both Australia and global capitalism.

Papers should be between 5,000 words and 8,000 words, as well as formatted according to the guidelines stipulated on the JAPE website: www.jape.org.

Please include an abstract of 40-80 words along with all submissions.

Manuscripts should be sent to David Primrose (david.primrose@sydney.edu.au).

All contributions will go through a double-blind refereeing process to determine their suitability for publication.