Making excuses for unemployment: The myth of a “skills gap”

It has taken ten years of expansion, but the U.S. unemployment rate has finally fallen below 4 percent.  However, this low rate of unemployment presents a somewhat misleading picture of labor tightness. For example, both the labor force participation rate and employment to population ratio remain significantly below previous highs, making clear that the economy is far from full employment.

The current labor force participation rate of prime age workers, those 25-54 years, is a case in point. It remains below the previous peak rate in 2008, and even further below the peak rate at the turn of the century. We would need an additional 1.2 million employed prime age workers to match the 2008 labor force participation rate and 2.5 million more to match the turn of the century rate. Still it appears that at the present moment unemployment is no longer a major political issue.

That said, since we can be confident that this expansion will end and unemployment will once again become a serious problem, it is worth revisiting how mainstream economists and government policy makers treated the high rates of unemployment that marked the first five years of this expansion. In brief, and perhaps not surprisingly, most tended to explain away the slow decline in the unemployment rate by blaming workers themselves. More specifically, they cited a “skills gap.”

Five or six years ago, everyone from the U.S. Chamber of Commerce to the Obama White House was talking about a “skills gap.”

The theory here was that high unemployment reflected a structural shift in the labor market such that jobs were available, but workers simply didn’t have the right education or training for them. Harvard Business Review ran articles about this—including articles rebutting people who said the “skills gap” didn’t exist—and big companies like Siemens ran paid sponsor content in the Atlantic explaining how to fix the skills gap.

However, as Yglesias notes, the skills gap story doesn’t hold up. Yes, business did complain for years that they found it hard to hire workers with the experience and skills they wanted. But the fact is, as three economists demonstrate in their recently published paper, there was no real skills gap. Rather, business just took advantage of the high rates of unemployment to jack up their skill requirements. And as the unemployment rate gradually fell, they lowered them, which ended talk of the skills gap. In short, employment problems are system generated, not worker caused.

In “Upskilling: Do Employers Demand Greater Skill When Workers Are Plentiful?,” the economists Alicia Sasser Modestino, Daniel Shoag, and Joshua Ballancee used a proprietary dataset of 36.2 million online job postings aggregated by Burning Glass Technologies (BGT). BGT “aggregates detailed information daily on more than 7 million online job openings from over 40,000 sources including job boards, newspapers, government agencies, and employer sites.” It also extracts details from the posted advertisements, allowing analysis according to 70 job characteristics, including job title, employer name, location, and the level of education and years of experience required. About half of the BGT postings include employer name. The authors tapped the BGT dataset to carry out three different tests to determine whether employer job requirements, specifically education and experience requirements, changed in response to changes in the supply of available workers over the years 2007 to 2014.

They first tested whether education and experience requirements grew more in states and occupations that experienced greater increases in the supply of available workers, measured both by state unemployment rates and by state labor supply/labor demand ratios. Then they carried out the same test, but this time looking at individual firms and their job requirements for specific job titles.

For both tests, the authors also used several control variables, including “the share of the state population with a bachelor’s degree in 2000 and the average age of the state population in 2000 to account for both heterogeneity in the pre-existing pool of skilled labor available to employers, as well as the initial share of openings requiring a particular skill in 2007 to account for heterogeneity across state × occupation cells.”

As a final check of their work, the authors made use of a “labor shock” that was uncorrelated with underlying economic trends: the drawdown of troops from Iraq and Afghanistan between 2009 and 2012. The authors examined “whether state × occupation cells receiving larger numbers of returning veterans correspondingly experienced a greater increase in their skill requirements.”

Their findings of a strong relationship between labor slack and increased skill requirements are illustrated in the following two figures. 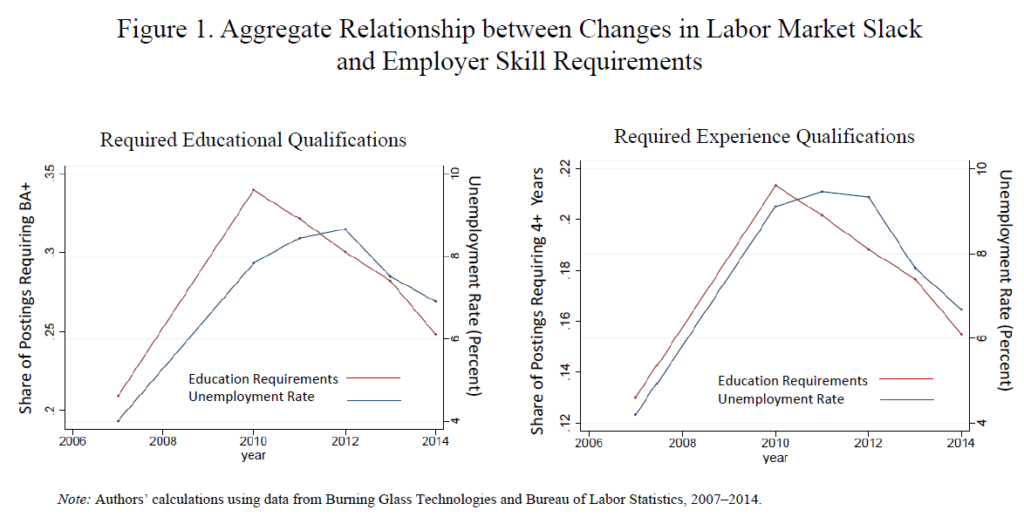 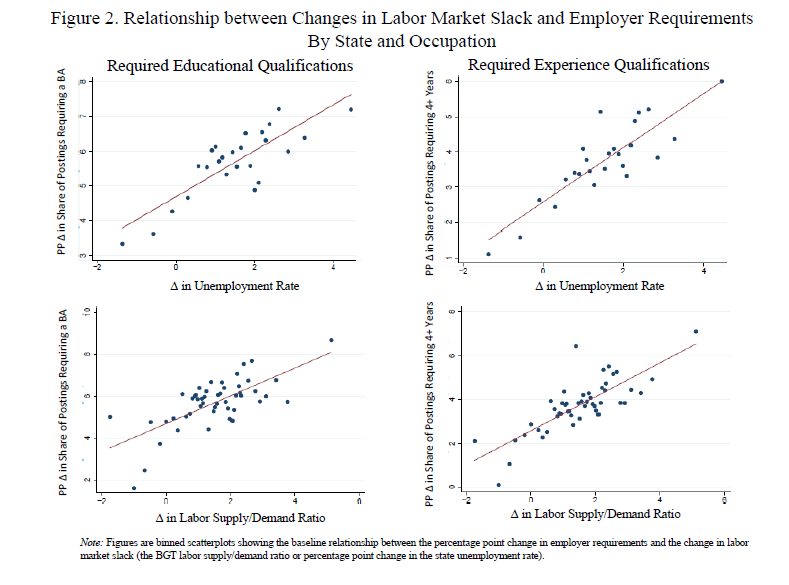 The second test also found a positive relationship between employer skill requirements and labor market slack even when limited to a consideration of the same job title at the same employer in the same state. As the authors state:

The claim of a skills gap was widely embraced by those looking to deflect attention from capitalism’s growing inability to generate adequate employment even during years of economic expansion. If the problem is a skills gap, then the responsibility for solving the problem rests on the shoulders of workers themselves, who will have to do a better job of keeping up with the times. However, as Yglesias notes in his article summary, “the skills gap was the consequence of high unemployment rather than its cause. With workers plentiful, employers got choosier.”

Unemployment rates will rise again, and papers like “Upskilling: Do Employers Demand Greater Skill When Workers Are Plentiful?” are helpful for preparing us to challenge those whose arguments serve to defend a system that has grown ever more unresponsive to majority needs.