The Criminalization of Homelessness 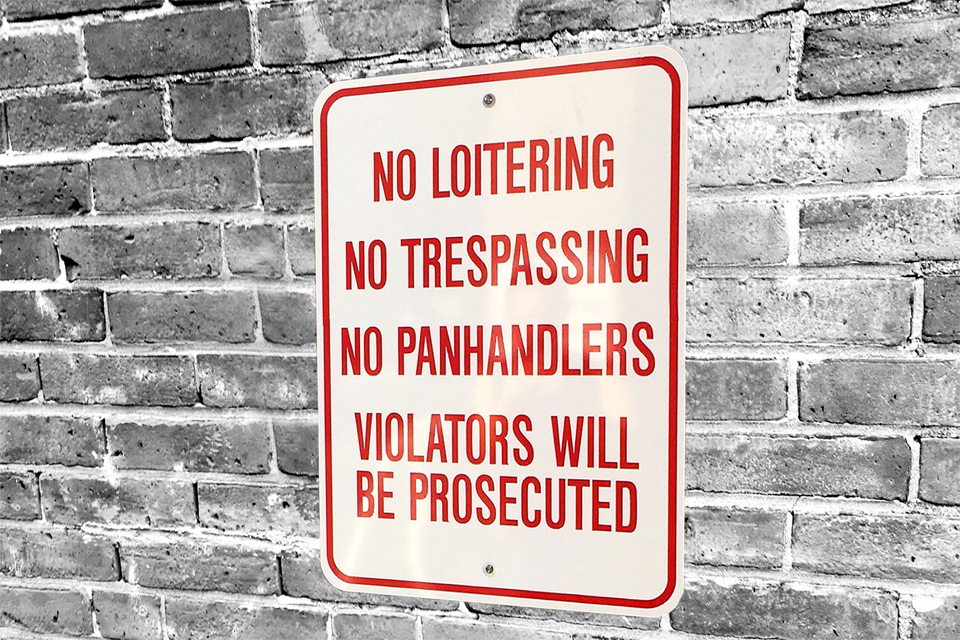 By Brian Hennigan;  PhD candidate in Geography at Syracuse.

The criminalization of homeless people in the United States, already vast, has ballooned in recent years. Anti “urban camping” laws – being anywhere with a makeshift bed or shelter – have increased by 69 percent; the criminalization of sleeping in public by 31 percent; of sitting or lying down on a sidewalk, 52 percent; of panhandling, 43 percent; and finally against loafing or loitering, 88 percent. These increases, moreover, do not apply to particular places, as did the first phase of criminalization in the late 1980s and 1990s. Rather, they apply to entire municipalities. Given the lack of shelters (not to mention affordable housing), many have no choice but to violate the law for their very survival.

Scholars of homelessness generally agree that city officials, desperate to attract footloose capital, push criminalization as a means to cleanse the streets for further gentrification. Cities, ravaged by deindustrialization, David Harvey argues, must “appear as an innovative, exciting, creative, and safe place to live or to visit, to play and consume in.”

Well situated within this framing, scholars have questioned why homeless people offend shoppers and those working and living in these spaces. Briefly put, most theories argue that homeless people’s offensiveness originates from their violation of aesthetics (they’re too poor looking) or because, without owning or renting private property, they violate bourgeois norms of “propertied citizenship.”

These two divergent theoretical framings, aesthetics and propertied citizenship, though, retain a common thread: a focus on the relations of consumption, that is, how wealth determines what people can buy and, relatedly, where they belong. Each posits that the offensiveness of homeless people derives from their inability to consume, to beautify themselves (with clothes, etc.), or to rent or buy housing. It is for these reasons, these theories suggest, that homeless people do not belong within urban public space.

As I argue in a recent article, we can learn much by thinking about the governance of homeless people in terms of production rather than solely consumption. And this is evident by looking beyond homeless people in public space. It is in such places that we can comprehend the reason why homeless people are so roundly criminalized in these prime urban spaces. Welfare services are not principally ones of meals, housing, teaching people how to consume better or aesthetically blend in among shoppers.

Rather, they are dedicated to the paternalistic rehabilitation of one’s capacity to work. This is specifically true for the so-called undeserving poor, or those who are “able-bodied,” have the capacity to labor yet are not working. Those deemed “disabled” and unable to labor for capital, meanwhile, are judged worthy of relief. Potential productivity, in other words, demarcates the history of poor relief under capitalism.

The process of enforcing work upon the able-bodied, then, is not new. Capitalism is based upon what Marx termed “the bloody legislation against vagabondage” where those out of work were “whipped, branded, and tortured by grotesquely terroristic laws into accepting the discipline necessary for the system of wage-labor.” In addition to brute force, and with the rise of capitalist social relations, welfare systems have always revolved around regulating the poor through enforcing work.

Just as welfare remains fundamentally about disciplining the poor into labor, the same holds for homelessness-specific welfare. One would be hard pressed to find a homeless shelter or related charity without an employment component, programs indistinguishable from broader welfare policy. “Workforce development” or “job readiness” programs are ubiquitous within homeless services provision, attempting to make homeless people “productive” for capital, by getting them jobs or what “skills” it seems they need to get one. There are also programs that – in lieu of outright criminalization – explicitly target panhandling through enforcing (sub-minimum wage) work.

This theorization suggests that the “offensiveness” of homeless people to shoppers in spaces of consumption – and thus to retailers in terms of threatening fixed capital (lowered property values) and value realization (unsold commodities) – is secondary. The stigmatization of homeless people does not suddenly commence once they enter restaurant and retail districts; it – like the latest swath of criminalization – stalks them across the city, into shelters and welfare offices.

By the time homeless people enter these spaces of consumption, they are already pariahs vis-à-vis the capitalist mode of production and all of the ideologies and institutions that naturalize and justify the place of workers within it. These retail and restaurant spaces are merely where homeless people are most present in public space and, thus, where that pre-existing stigma is most acute vis-à-vis the public.

Homeless people, in other words, tend to be devalued socially, politically, and aesthetically because they have been devalued by, and are value-less to, capital. They violate the capitalist law of value, they’re “not working for what they get,” and they need to, as the common refrain goes, “get a job.” This much is evident given that the primary function of anti-homeless laws and welfare is not to raise awareness about or validate able-bodied yet non-working homeless people so they’re welcome in public space (they certainly don’t have the economic or political power to do this themselves). Rather, a dragnet of criminalization forces such underserving homeless people into places where they are reformed as potential employees. It is through getting a job that the poor, homeless or not, become worthy of welfare assistance. By achieving productivity and thereby proving their work ethic, they are welcomed back into the proper public, able to exist in public space.

This class-based theory of homelessness helps explain both why anti-homeless laws exist and how homeless people are treated by charities and state welfare. It also suggests a politics of conceptualizing homeless people as an irregularly employed faction of the working class in need of organizing – around both production and social reproduction – rather than an abstract, passive population requiring mere charity. This positions homeless people – as part of the working class – to not only shrug off the oppressive yoke of poverty and exclusion from public space, but to break its political-economic basis: exploitation.

To read more, see: Brian Hennigan. “From Madonna to Marx: towards a re-theorization of homelessness” in Antipode: A Radical Journal of Geography 2018.