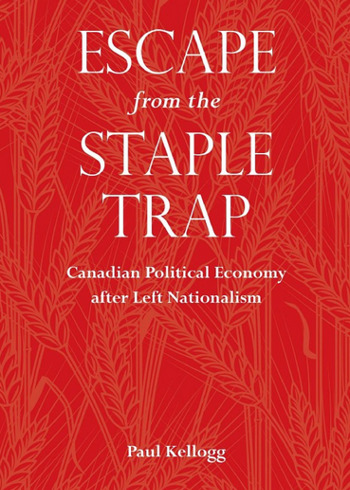 Paul Kellogg interviewed by Robin Chang on Escape from the Staples Trap:

A concrete understanding of contemporary Canadian economic development depends in part on a grasp of the current institutional structures within the North American economic bloc and how this regional trading bloc interacts with others within the world market. In terms of tracing the history of capitalism in the Canadian context, the next question becomes what are the comparative forms of colonization within the Americas as well as the role of staples commodity exports in that development. Due to these different historical roots, capitalist development has in fact taken different forms, in which varied patterns are persistent through the competitive dynamic of capitalism.

For Canada’s particular economic history, this has often meant studying how natural resource extraction affected the trajectory of capitalist accumulation, and the related formation of class structure and differentiation in the country. The important role of resources sectors to Canadian development, and Canada’s proximity to and relation with the USA trade and investment, formed the context in which the staples theory of growth developed and became accepted among Canadian academics and policy makers. The staples-related economic policy issues and their related academic debates produced an intellectual environment that allowed institutionalism, in addition to radical and Marxist perspectives, to share the political and intellectual stage. During the 1970s, a New Left with a Left nationalist critique of Canadian “dependency,” and a connected political movement centered within the New Democratic Party (NDP), concluded that national sovereignty in the world economy ought to be the priority for the Left.