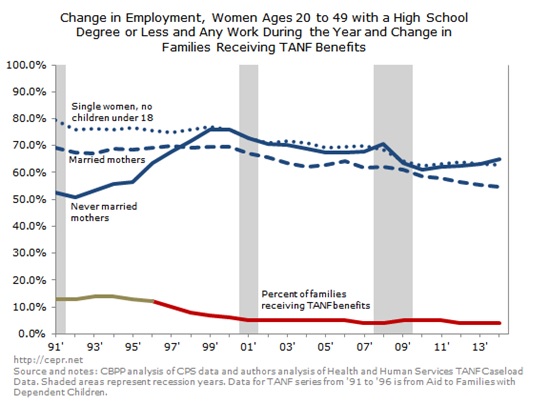 By Virginia Rutter
Welfare reform hits 20 this month. The Center for Economic and Policy Research has done much work examining how full employment in the 1990s shaped employment, income, and poverty. In observation of this 20th anniversary, Alan Barber, of CEPR, and I prepared a graph, above, that tells an important, often neglected, piece of the story.
Using data from the Current Population Survey and Department of Health and Human Services TANF Caseload report, the figure tells a simple story. Never-married mothers with a high school degree or less increased their rate of work from the early to the late 1990s by nearly 30 percentage points. As Philip Cohen also discusses, this trend began well before the 1996 welfare reform, suggesting that the policy was not the source of the rise, but that other macroeconomic forces were helping these families do better.
As the graph also demonstrates, the rise in employment is associated with a decline in reliance on the welfare program, Temporary Aid to Needy Families (TANF). The line at the bottom of the chart shows a steady decline in the late 1990s that corresponds to the rise in women’s work in the line above.
Here’s the catch: Employment stopped rising, and began to fall by the early 2000s. Yet, TANF, as part of the so-called safety net, did not move upwards as less-skilled jobs disappeared. Instead, the TANF rolls continued to decline, as Shawn Fremstad details in his report on millennial parents.
What does this mean? CEPR director Dean Baker has written extensively about how to fight poverty through full employment. This chart suggests that the current system of welfare is not part of the solution, and stands as a reminder that data, not ideology, will help us reduce poverty.
This piece was originally posted here