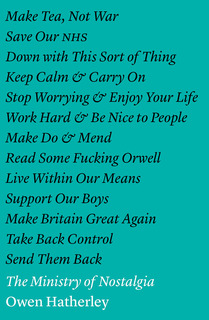 Why should we have to “Keep Calm and Carry On”? In this brilliant polemical rampage, Owen Hatherley shows how our past is being resold in order to defend the indefensible. From the marketing of a “make do and mend” aesthetic to the growing nostalgia for a utopian past that never existed, a cultural distraction scam prevents people grasping the truth of their condition. The Ministry of Nostalgia explodes the creation of a false history: a rewriting of the austerity of the 1940s and 1950s, which saw the development of a welfare state while the nation crawled out of the devastations of war. This period has been recast to explain and offer consolation for the violence of neoliberalism, an ideology dedicated to the privatisation of our common wealth. In coruscating prose, Hatherley issues a passionate challenge to the injunction to keep calm and carry on.