Graph/Table of the Week: When did Corporate America begin?

This graph is a bit old, from Alfred D. Chandler Jr.  and James W. Cortada’s book A Nation Transformed by Information: How Information Has Shaped the United States from Colonial Times to the Present, and more precisely from Chandler’s introductory chapter. It shows the founding dates of the 1994 Fortune 500 corporations. 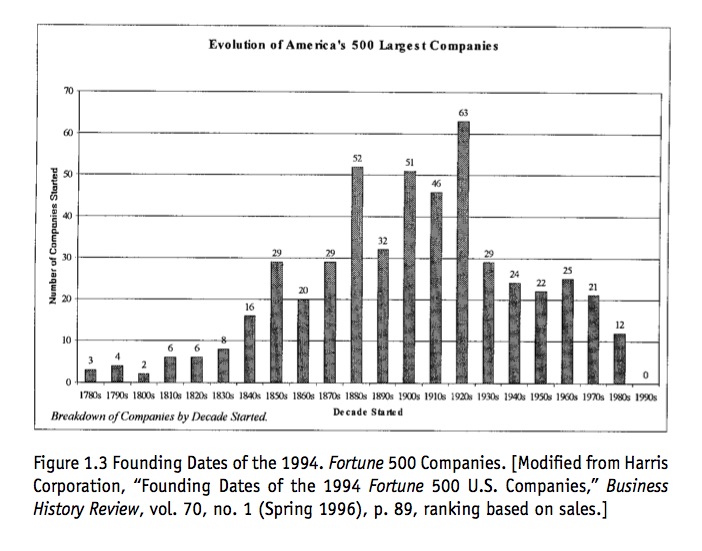 The story is that most were founded in the 5 decades starting in 1880. So from the rise of the Robber Barons to just before the New Deal. Not surprising. Chandler is well-known for showing the rise of big business in the late 19th century, and the role of railroads, and the telegraph, transportation and telecommunications, as well as the managerial revolution in the process. It would be interesting to see how many corporations that are now in the Fortune 500 have been founded in the post-deregulation, financialization, venture capital, Silicon Valley era. That is, in the new era of Robber Barons.
PS: It opens up another question. Chandler seems to think, like Landes in another debate, that technology caused the rise of the corporation. The alternative would be like Marglin to suggest that the rise of the corporation allowed for the use of the technology in a more widespread way. The debate between Marglin and Landes was on the origins of the factory system, by the way. Marglin’ paper was published in the Review of Radical Political Economics here.