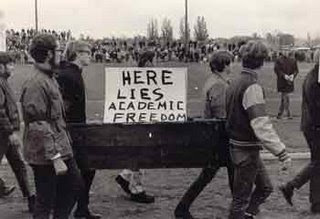 The policy changes were driven by provisions of the 2015-17 state budget that stripped tenure protections from state law and expanded administrators’ authority to fire tenured faculty, allowing for layoffs if academic programs are curtailed, modified, discontinued or redirected. One policy defines awarding of tenure essentially as it was in state law before Republican lawmakers removed it and directed the regents to craft new tenure policy. Another adds new requirements for post-tenure reviews every five years and would make it possible to fire tenured faculty if they don’t meet remediation plans within three semesters, or up to four semesters if it’s a research-related issue. A third, the most controversial, would allow layoffs of tenured faculty if academic programs are cut after all other feasible alternatives are considered. The proposed policy does not explicitly prohibit faculty layoffs due to changes to educational programs short of out-right discontinuation, which was the most common complaint about the proposal on the Regents website’s comment section.  Several members of the Tenure Policy Task Force that prepared the proposal had urged that those prohibitions be added.  Although task force chair Regent John Behling said in December that the requested change regarding layoffs would be considered, it did not make it into the draft approved by the committee.

Read rest here
NOTE: This is a very frightening development in higher education. Not only can tenured professors be fired in units that are being discontinued, but there are no protections to prevent layoffs if a department or unit changes its educational and research focus. Thus, if a program that centers its attention on heterodox economics decided that its main focus will be corporate accounting and mainstream micro, for instance, all tenured faculty who do anything else, could be shown the door. This is a horrible development. And what is just as bad is that those who don’t have tenure who are associated with various progressive programs or institutes in the UW system could summarily be fired and their units shut down. This is exactly that the pro-corporate groups want-a university system that teaches students to be obedient zombies rather than critical thinkers that expand their intellectual horizons as engaged citizens.