New Book by Alain Badiou & Marcel Gauchet: What Is To Be Done? A Dialogue on Communism, Capitalism, and the Future of Democracy 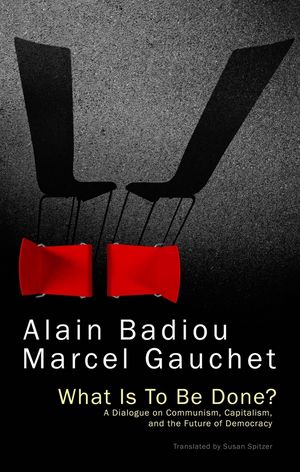 The fall of the Berlin wall was seen by many as the final triumph of liberal democracy over communism. But now, in the wake of the great financial crisis of 2008 and its aftermath, things look a little different. New questions are arising about capitalism and democracy, new social movements are challenging established institutions and new political possibilities are emerging. Is democracy an inevitable hostage of capitalism, or can it reinvent itself to meet the challenge of globalization? In an exclusive, previously unpublished dialogue, Alain Badiou, a key figure of the radical left and a leading advocate of the communist idea, and Marcel Gauchet, a major exponent of anti-totalitarianism and a champion of liberal democracy, confront one another. Together, they take stock of history, interrogate one another s views and defend their respective projects: on the one side, the revival of the communist hypothesis, and on the other, the radical reform of a contested democratic model.