New Book by Fred Moseley: Money and Totality – A MacroMonetary Interpretation of Marx's Logic in Capital and the End of the 'Transformation Problem' 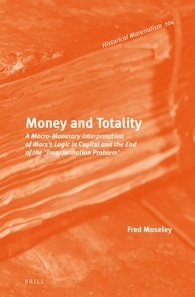 This ambitious book presents a comprehensive new ‘macro-monetary’ interpretation of Marx’s logical method in Capital, based on substantial textual evidence, which emphasises two main points: (1) Marx’s theory is primarily a macroeconomic theory of the total surplus-value produced in the economy as a whole; and (2) Marx’s theory is a monetary theory from beginning to end and the circuit of money capital – M – C – M’ – is the logical framework of Marx’s theory. It follows from this ‘macro-monetary’ interpretation that, contrary to the prevailing view, there is no ‘transformation problem’ in Marx’s theory; i.e., Marx did not ‘fail to transform the inputs of constant capital and variable capital’ in his theory of prices of production in Part 2 of Volume III.