New Book by Jerry Harris: Global Capitalism and the Crisis of Democracy 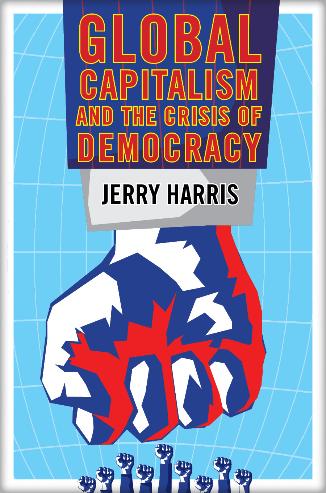 Democracy is in crisis, from the streets of Ferguson to the struggle in
Greece. Throughout the world millions suffer under neoliberalism and austerity but are unable to force their governments to address their needs. Fundamentally, democracy is about the relationships between the state, markets and civil society. Attempts to artificially repress the functions of any of these institutions result in political, social and economic problems that lead to irresolvable contradictions and eventual failure.  This book undertakes the examination of capitalist democracy, globalization, and the emergence of a transnational capitalist class needed to develop a strategy for implementing democracy beyond its current impasse. Early capitalism contained the contradiction between property rights  and popular democracy. The American and French revolutions saw an alliance between the capitalist class, farmers, craft workers and  laborers. Democracy was a class compromise, based on the political balance between the masses and the new ruling elite.This tension has set in motion the continual conflict over democratic rights. As the transnational capitalist class coalesced into a hegemonic bloc, their project was to re-engineer the national state to serve global markets and suppress democratic input from civil society. Mainstream media, and many on the left, still portray the world system in terms of nationally contained economic units, with corporate champions flying flags with patriotic colors. But a serious look at the data clearly shows that TNCs are deeply committed to global production, financially connected to other global players, and base their corporate strategy on world-wide accumulation. Such patterns hold true for every major industry. This is the structural manufacturing basis of global capitalism.What may be truly different in this era is a historic reversal of human rights and democracy. This has led to a growing social crisis that cannot be resolved by global capitalism.Socialism emerged as the alternative to capitalism, promising economic equality and social justice. But the Soviet system centralized power into the state, suppressing both civil society and the market. This created fundamental economic and social contradictions. Eventually the failure of an internal transformation led to collapse. As for anarchism, its theory ignores the role of the state and rejects the market, creating a limited ideology of social change that fails to create a viable alternative. A successor system must recognize the relationships between the state, markets and civil society, seeking to balance naturally occurring contradictions through the practice and renewal of democratic institutions. Conflicts are not an indication of a dysfunctional society, but of a vibrant, adaptable and open society. The key is recognizing horizontal democracy as the structure for resolving conflicts. Worker ownership and cooperatives may be the first step in constructing such a society, alongside sustainable economics, protagonistic democracy and governmental public financing.