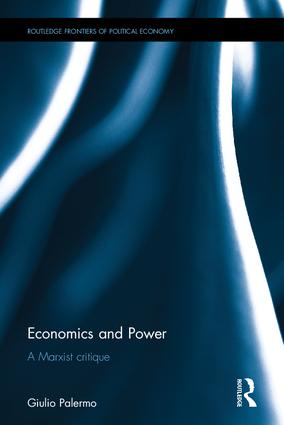 In the economic debate, power is defined and studied mainly as an interpersonal relation occurring out of perfect competition. This is a consequence of the combination of methodological individualism and the assumption of competition as a natural and everlasting coordinating mechanism, operating without any sort of coercion. This methodology, however, is not adequate to analyze the forms of social coercion that characterize capitalism.

Economics and Power criticizes the main theories of power developed in economic literature, analyzing ultraliberal contractualism to radical political economics, and ultimately suggesting a Marxist conception of power and coercion in capitalism. Palermo’s ontological argument is rooted in the philosophy of ‘critical realism’.This unique volume presents his main finding as being that the essential coercive mechanism of capitalism is competition. Capitalist power is not caused by a lack of competition, but by the central role it plays in this mode of production. Following this, the chapters reconstruct a Marxian conception of power where it is analyzed as a social relation and argues that perfect competition does in fact exist under the disguise of capitalist power. This book criticizes the construct of power and the underlying ideas surrounding perfect competition.

Post-Walrasian economics is the result of a convergence between heterodox schools, such as new institutionalism, new Keynesian economics and radical political economics. The debate on power develops mainly within this methodological framework. Liberals and radicals have confronted each other harshly about the nature of power in capitalism, but their common method leads to the same mystified conception. Marx discussed the class nature of competition and explained how social coercion and individual freedom coexist in capitalism. Post-Walrasians represent
competition as the highest expression of individual freedom and characterize power as its negation. Reality is thus turned upside-down, as in old vulgar economics: the power relation suffered by the worker is not caused by his/her social weakness, but by his/her individual strength. From the questions it raises to the answers it offers, post-Walrasian economics is only a product of bourgeois ideology and a tool to reinforce its myths.