New Book by Ron Baiman: The Morality of Radical Economics 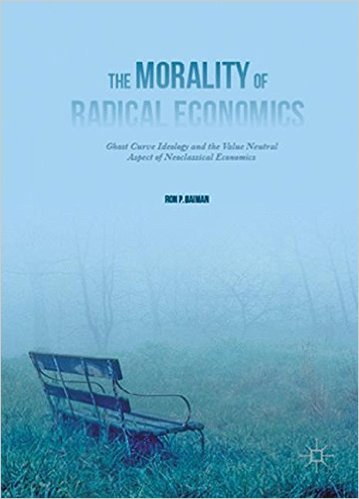 This book is in equal parts a treatise on morality and economics, a critique of neoclassical orthodoxy, a brief for replacing mainstream economics with a radical political economics, and an argument for the abandonment of neoliberal capitalism in favor of democratic socialism. It includes a detailed proposal for a “demand and cost” alternative to “supply and demand” analysis and an in-depth technical critique of both neoclassical “high theory” and “applied microeconomic analysis” demonstrating that these are not only infeasible or immoral, but have directly contributed to public policy disasters. Further, the book suggests that only a moral economics in the form of radical political economy can address the looming economic and environmental crises of today’s world.
Baiman begins with an introduction to morality and ethics in both general sciences and in economics in particular. He then guides readers through evidence of how neoclassical economics has not only failed to remain objective and value-free, but has become an ideology of apologetics protecting an immoral system. In addition to breaking down real-world examples to demonstrate his assertions, Baiman analyzes a theoretical Utopia design exercise. He concludes by arguing that the only form of economics that supports widely shared human values—such as social equity, democracy, and solidarity—is so-called “radical economics”, and that all true economics science should be directed toward achieving more socially productive economic activity. An invaluable guide to morality and economics, this book will appeal to researchers and teachers looking to change the way we think about economics, policy, and society.