New Book by Robert Latham: The Politics of Evasion, A Post-Globalization Dialogue Along the Edge of the State 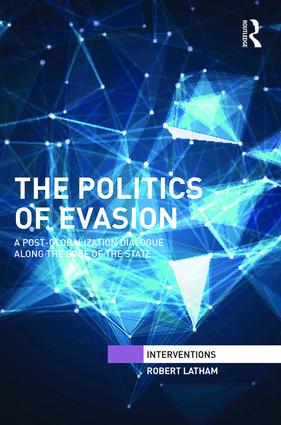 Burgeoning national security programs; thickening borders; Wikileaks and Anonymous; immigrant rights rallies; Occupy movements; student protests; neoliberal austerity; global financial crises – these developments underscore that the fable of a hope-filled post-cold war globalization has faded away. In its place looms the prospect of states and corporations transforming a permanent war on terror into a permanent war on society. How, at the critical juncture of a post-globalization era, will policymakers and power-holders in leading states and corporations of the Global North choose to pursue power and control? What possibilities and limits do activists and communities face for progressive political action to counter this power inside and outside the state? This book is a sustained dialogue between author and political theorist, Robert Latham and Mr. V, a policy analyst from a state in the Global North. Mr. V is sympathetic to the pursuit of justice, rights and freedom by activists and movements but also mindful of the challenges of states in pursuing security and order in the current social and political moment. He seeks a return to the progressive, welfare-oriented state associated with the twentieth century. The dialogue offers an in-depth consideration of whether this is possible and how a progressive politics might require a different approach to social organization, power and collective life. Exploring key ideas, such as sovereignty, activism, neoliberalism, anarchism, migration, intervention, citizenship, security, political resistance and transformation, and justice, this book will be of interest to academics and students of Political Science, Sociology, Anthropology, Law, Geography, Media and Communication, and Cultural Studies.