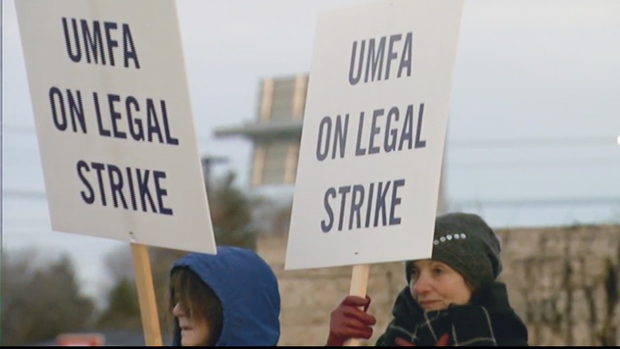 While teachers continue to walk the picket line, a professor in the Department of Philosophy says the “soul of the university” is on the line.
Arthur Schafer, who is also the founding director of the Centre for Professional and Applied Ethics, said the strike is all tied to a shift in culture at the University of Manitoba.
“What the administration is doing is increasing teaching load, increasing class sizes, and they want to be able to do this unilaterally and we’ve said, ‘No’,” Schafer said.
“We’ve said if you are going to do it you have to negotiate with us, there has to be a dispute resolution mechanism. We’ve got a real problem and it’s undercutting our ability as teachers and as scholars.”

Bargaining teams for the University of Manitoba’s faculty and administration went back to the conciliation table on Thursday for the first time since an offer was made last Sunday to the faculty association. That offer was promptly rejected by the association the following day.

University of Manitoba ethics professor Arthur Schafer says the soul of the university is on the line. (CBC)

Schafer said the problem is the changing way the university operates. He said continuing to operate the university under a “collegial” model would stop it from moving in a corporate direction. A collegial model requires deans and faculties to collaborate in setting workload expectations and leadership.
Schafer said the administration’s job is to help professors teach and research, rather than acting as the professors’ “boss.”
“I think increasingly our administration seems to be suggesting — by what it does and what it doesn’t do and its priorities —that they see themselves as our boss and their priorities, which may not be teaching and research, are the ones that should prevail,” he said.
That means they go by a business model that means more administrators, doubling class sizes and having professors teach twice as many classes, Schafer said. That doesn’t reflect the essence of the university and can have a negative impact on students, he added.
“As the administration grows in size and their salaries grow, it turns out there is less money for actually doing the work that the university is about.
Information about the status of courses, classroom scheduling and service changes can be found on the university’s website.
originally posted here
NOTE: URPE offers its strong support and solidarity with respect to the current social action and the many challenges the faculty has been facing throughout the collective bargaining process with the administration of the University of Manitoba, especially, but certainly not exclusively, since one of the editorial board members of our flagship journal Review of Radical Political Economics (RRPE), Fletcher Baragar, a professor of economics at U of Manitoba, are actively involved in the struggle. For more on the strike at U of M, see here