John Weeks on how Obama ushered in the age of Trump 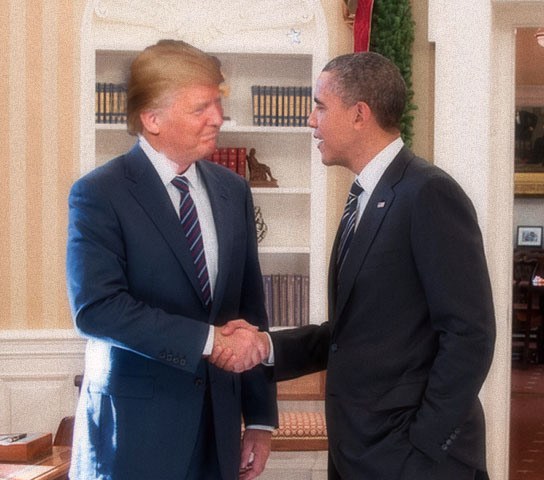 The iconic slogan “Yes, we can!” inspired the wave of enthusiasm that swept up millions of Americans during the presidential election of 2008 and carried Barack Obama to the White House. If that slogan epitomized the beginning of the Obama presidency, he had an equally iconic ending: the first African-American president shaking hands with the first president-elect in at least 100 years endorsed by the Ku Klux Klan.
In November 2008 Barack Obama won the presidency with almost 53% on a voter turnout of 58%. The winning percentage was the highest since 1988 and the turnout the largest for 50 years. The first non-white president took office on a surge of enthusiasm exceeding any since Franklin Roosevelt in 1932 (by comparison John Kennedy went to the presidency with less than half of total votes and a winning margin of 0.2 percentage points).
The enthusiasm for Obama arose from fervent hope for specific changes: 1) a universal, affordable health system; 2) the end of two disastrous wars (Afghanistan and Iraq); 3) economic recovery from the worst collapse in 80 years; and 4) action against banks and bankers to prevent a recurrence of the collapse.
To fulfil these hopes, Obama had majorities in both houses of Congress, 58 of 100 Senators (largest majority of any party in 30 years) and 257 seats in the House (most since 1992). By any measure the new president enjoyed an overwhelming majority.  Under some circumstances the Republican minority in the Senate could prevent voting, but a determined and bold president could force votes within the arcane Senate rules…