New Book by Steve Keen: Can We Avoid Another Financial Crisis? 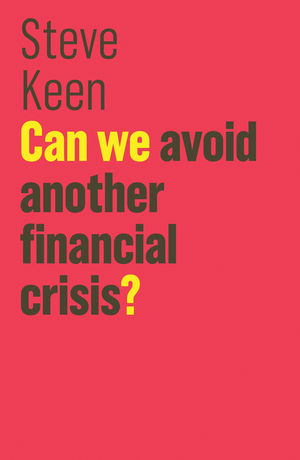 The Financial Crash that convulsed the world in 2008 had cataclysmic effects on the global economy, and took conventional economists completely by surprise. Many leading commentators, taken in by the hubris of economics, declared shortly before the crisis that the magical recipe for eternal stability had been found. Less than a year later, the biggest economic crisis since the Great Depression erupted. In this compelling and explosive book, Steve Keen, one of the very few economists who anticipated the crash, shows why the self-declared experts were wrong and offers a realistic, monetary approach to economics that can warn of crises before they happen. He shows how ever-rising levels of private debt make another financial crisis almost inevitable unless politicians tackle the real dynamics causing financial instability. He also identifies the economies that have become ?The Walking Dead of Debt?, and those that are next in line to join them ? including China, Canada and Australia. A major intervention by a fearlessly iconoclastic figure in modern political economy, this book is essential reading for anyone who wants to understand the true nature of the global economic system and the challenges facing it.

See more here
For those interested in performing a review on this book for URPE’s flagship journal, Review of Radical Political Economics, please get in touch with David Barkin