Dean Baker: Is Globalization to Blame? 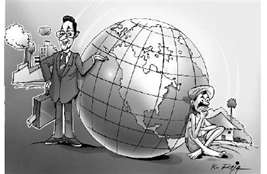 While we cannot accept the racism and misogyny on which Donald Trump’s electoral victory fed, we must recognize that the white working-class voters who largely supported him have real grievances. They have been economic losers over the last four decades. They have seen their wages stagnate, and their kids face bleak labor-market prospects. Their plight resulted from economic policies that were designed to redistribute income upward. Globalization was the most visible of these policies. Among the many myths about globalization, the worst is that the loss of large numbers of manufacturing jobs in the United States (and Europe) was inevitable. Because the developing world is full of low-paid workers, this argument goes, it was impossible for Americans to compete. Economists and politicians promoting this view might consider the outcome unfortunate for U.S. workers, but also unavoidable. They take comfort in the growing living standards of billions of impoverished people in the developing world. This is a palatable view of the history of the last forty years for those who were not its victims, but it is wrong in just about every way. Globalization need not have taken the course it did. There was nothing inevitable about large U.S. trade deficits, which peaked at almost 6 percent of GDP in 2005 and 2006 (roughly $1.1 trillion annually in today’s economy). And there was nothing inevitable about the patterns of trade that resulted in such an imbalance. Policy decisions—not God, nature, or the invisible hand—exposed American manufacturing workers to direct competition with low-paid workers in the developing world. Policymakers could have exposed more highly paid workers such as doctors and lawyers to this same competition, but a bipartisan congressional consensus, and presidents of both parties, instead chose to keep them largely protected.