New book by Michelle Holder: African American Men and the Labor Market during the Great Recession 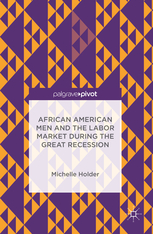