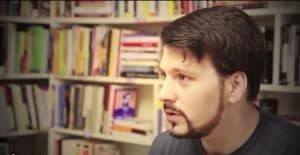 Richard Seymour is a writer, scholar, journalist, broadcaster, and political activist. Born in Northern Ireland and now living in London, he has become a leading voice on the left. An exceptional writer, his prose is both elegant and accessible to a mass audience. His blog, Lenin’s Tomb, is a consistent source of thoughtful analysis and commentary, and his broadcasts on Telesur English are models of clarity. Seymour’s books include The Liberal Defense of Murder, Unhitched: The Trial of Christopher Hitchens, American Insurgents: A Short History of American Anti-Imperialism, Against Austerity, and most recently, Corbyn: The Strange Rebirth of Radical Politics. The following interview was conducted via email in late December 2016…(see rest here)