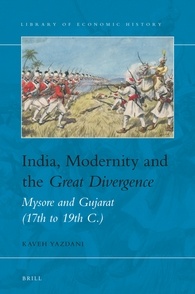 From BRILL. By Kaveh Yazdani,

India, Modernity and the Great Divergence is an original and pioneering book about India’s transition towards modernity and the rise of the West. The work examines global entanglements alongside the internal dynamics of 17th to 19th century Mysore and Gujarat in comparison to other regions of Afro-Eurasia. It is an interdisciplinary survey that enriches our historical understanding of South Asia, ranging across the fascinating and intertwined worlds of modernizing rulers, wealthy merchants, curious scholars, utopian poets, industrious peasants and skilled artisans. Bringing together socio-economic and political structures, warfare, techno-scientific innovations, knowledge production and transfer of ideas, this book forces us to rethink the reasons behind the emergence of the modern world.