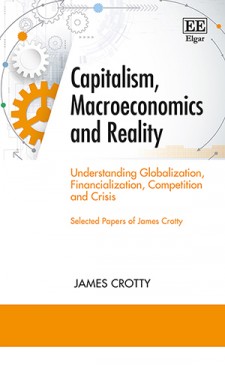 By James Crotty. From Edward Elgar:

The essays comprising this collection analyze the deep flaws in the methodological foundation of mainstream economic theory, and explain how these flaws make mainstream economics more ideology than sound social science. James Crotty develops alternative theories built on realistic assumptions that can explain most of the disastrous economic and financial developments of the past four decades. His work contributes to the collective creation of a solid theoretical foundation on which to build an understanding of the ‘laws of motion’ of capitalism in the post WWII era. This wide-ranging set of papers deals with crucial questions in economic theory, economic policy and economic history. The papers help explain why economic performance deteriorated dramatically in the West over the past three decades as the “Golden Age” of capitalism after World War II was replaced by global neoliberal capitalism. They show that theoretical frameworks rooted in the radical and heterodox traditions can explain this evolution and the current global economic and financial crisis, something mainstream theories cannot do.