New book: Crisis and the Failure of Economic Theory – The Responsibility of Economists for the Great Recession 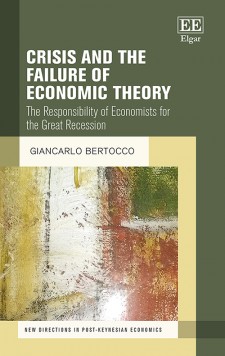 By Giancarlo Bertocco. From Edward Elgar:

Economists have rightly been criticized for not having foreseen the crisis that exploded in 2007–2008. As Giancarlo Bertocco eloquently argues, responsibility does indeed rest heavily on their shoulders. By developing a theory which excluded the possibility that a catastrophic crisis could ever happen, the economics profession has justified decisions and behaviours that caused the Great Recession. This book presents an alternative theoretical approach built on the lessons of Marx, Keynes, Schumpeter, Kalecki, Kaldor and Minsky, which highlights the structural instability of a capitalist economy and the endogenous nature of the current crisis. This fascinating book has several distinctive features. It begins by highlighting the limits of traditional economic theory and reveals the contradictions found in mainstream explanations as to the origins of the crisis. The author goes on to argue that economists not only failed to foresee the crisis but actually ignored the warning signs of instability that emerged during the Great Moderation. Bertocco presents an original interpretation of Keynes’s argument that underlines the importance of Schumpeter’s theory of credit in order to explain the relationship between money and crisis which characterizes a Keynesian monetary theory of production. Finally, he demonstrates that the nature of the crisis has important policy consequences and proposes a specific set of measures that take into account its structural nature. The comprehensive analysis and enlightening theoretical approaches will make this book vital reading for economists, policymakers and students seeking a clear understanding of the nature of the current crisis and the structure of the neoliberal economic system in which we live.