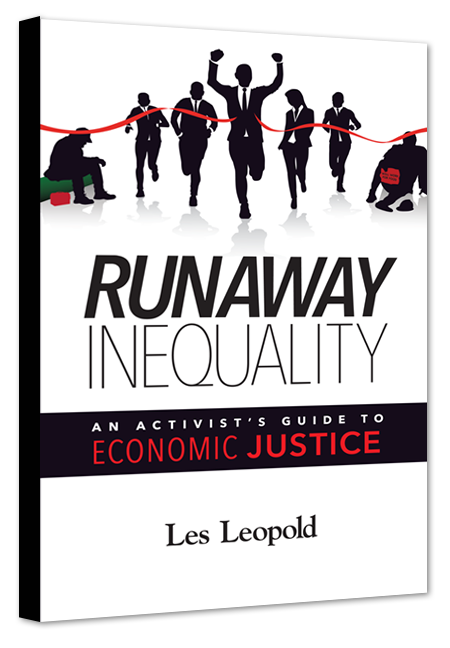 How can unions help create a social movement to take on Wall Street’s economic and political dominance?

That’s the question that the Communications Workers (CWA) are tackling with labor educator Les Leopold. The training program they’ve put together, based on his book Runaway Inequality: An Activist’s Guide to Economic Justice, has already reached hundreds of union members and community activists in a dozen states—where it’s getting rave reviews and helping fuel the growth of local coalitions.

Participants get a crash course in the rapidly growing gap between the super-rich and ordinary workers. They learn how the ever-growing power of hedge funds and private equity managers has put our government in thrall to the billionaire class and contributed to environmental devastation, racial discrimination, an outsized prison population, and plummeting wages.

“This training is a direct result of Occupy Wall Street,” says Verizon tech Ray Ragucci of Local 1102 on Staten Island. “Occupy had the message, but I don’t think they were organized well. So now what we’re trying to do is to keep it going and turn it into a real solid movement.”

“People are hungry,” says Leopold. “They’re trying to understand the economic chaos around them. It’s hard for them to put the pieces together.

“The training is about showing the interconnectedness between all the issues that face people, and showing how they’re tied together through this runaway inequality, financial strip-mining model.”

By building a common understanding of the problems we face—that, as one chapter of the book puts it, “everything is connected to everything else” and an injury to one is an injury to all—the program aims to build a cross-movement alliance that can take on the economic and political elite.

“Right now, we’re all stuck in our own individual thing,” says Ragucci. “The unions do what the unions do, and the Fight for 15 does what they do, the environmentalists do what they do, and so on. It’s all about breaking out of that. Then it’s like back in the ’50s and ’60s, when you had the civil rights movement—it was all different groups getting together and backing each other up.”